"Just don't make it so knotty that I have to cut my hair, I have a party to go to on Saturday." Those were the final and only words of wisdom I gave to my lovely boyfriend Joe before he disheveled my hair for two hours. My hair, five hairstyles and just a clueless guy with a pair of GHDS... here's what happened when I trusted my boyfriend with my hair.

As we sit down to have dinner I tell him that the sweet potato will have to wait because tonight’s the night he has to do my hair. And we need natural light on our side so, ahem, if you could make it quick.

My hair before he got hold of it

“Five hairstyles? How long is that gonna take?!”

“How long’s a piece of string babe, it’s down to you.”

I present him with his tools: a couple of hairbands, a can of lacquer, GHDs, a festival hair garland and a jazzy blingy hair pin from Primark that I use when I want to bung my hair up in an oriental freestyle. It’s possibly the tackiest thing I’ve ever seen but I’d be top-knot less without it.

I give him his hit list of five hairstyles and as I suspected each is more baffling to him than the last. With one last warning about getting too close to my ears with the straighteners, he begins.

He’s having a bit of a mare with the hair bands already, “These are so tight how do you put them round your wrist?” But then he finds amusement in my little tufts of baby hair and his pain threshold is back on form.

He keeps harping on about this long black tool his sister used to use to tie her hair up. “You know, the long tool to loop your hair through.” I haven’t got one of those much to his dismay.

I ask him if he even knows what a plait is, at this stage he thinks so, he’s just not sure how to do it.

“How do you do this on your own, you’ve got more hair than a horse?” In all fairness, I can only plait my hair to the side, French plaits only happen when I can recruit my friend’s mum to do it. Isn’t it great when you find someone that can French plait? And then you sleep in it for days because you want to keep it in. Just me?

He's twisting I can feel him twisting it and he's just worked out, “I have a feeling that when I let go of this it's just gonna spin round. I've got to figure out how to prevent that spin.”

He does some kind of tucking motion and tells me he’s done with the ‘Figure 4” hairstyle – that’s the name he’s given this little loopy number.

He didn’t quite manage the weaving in and out with three sections thing but I like his version! I think the figure 4 could defo catch on. 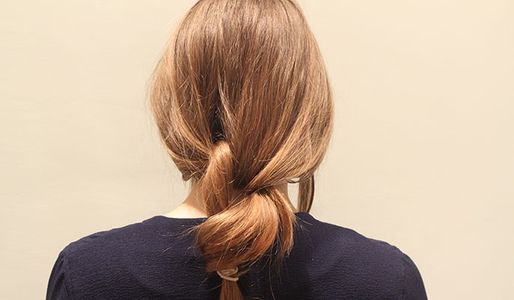 I have no idea what he’s planning to do here but he says he’s just gonna go with it despite how 'tough it's gonna be without his little black tool.' Third world problems right there.

He’s managed to get my hair into a ponytail, he just doesn't know how to turn the pony into a more exciting updo. He keeps flopping the hair on top of my head and trying to tuck it in.

I give him hmmms of encouragement when he starts rolling it up in a ball and amazingly he's winged it. Of course he’s given it a name too. Say hello to The Bobble. 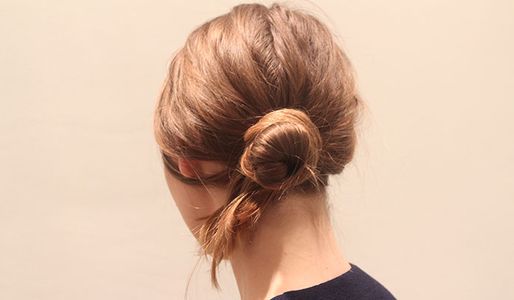 He's not as good as taking out the bobble as he is putting in and he’s also not very sympathetic when I tell him he’s hurting me, appaz I’ve got to stop being a baby. FYI this the guy that squeals every time I give him a head massage (I know right good GF brownie points) because it pulls on his short strawberry blonde locks.

Disaster strikes. He’s lost a hairband in my hair. I was thinking this is it, I’m actually gonna have to get my hair cut but it’s fine, it’s suspended in some stray hair above my ear. Panic over.

"How do I get it to stay there at the top? That's the problem." Sticking to what he knows best he shoves it into a slightly messier version of The Bobble. Genius.

What would you call the flower thing you're using Joe? "Oh I'm not concentrating on the flower thing I'm just thinking about the whole look. I'm calling this The Bestival Bitch." Charming, I think we’re done here.

​PS that lumpy parting though! 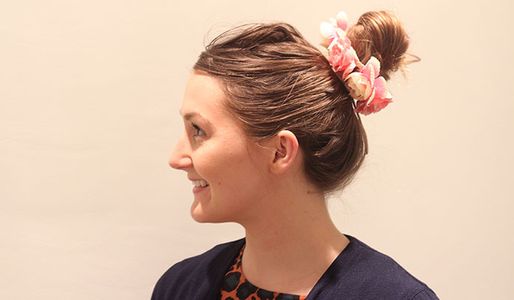 We both suddenly become aware that we’ve been sat in the kitchen for two hours playing with my hair. He turns to me and says:

​“If anyone saw this over the fence they would think WTF is up with them.” (For context his kitchen has French glass doors and his very visible garden backs onto an alleyway, we're not sat down the pub casually playing hairdressers over a packet of McCoy's).

I purposely start bopping around to Usher’s you can dance on the pole song to try and annoy him and get him to go wrong but that backfires because he’s frustratingly patient. I know he secretly enjoys these experiments.

He’s done and he’s decided I look like one of those tw*ts from Chelsea (his words not mine).

“He’s not a tw*t, he’s cool and hot.” It’s not the first time someone’s told me I look like Oliver Proudlock, so this is just the news I wanted to hear. 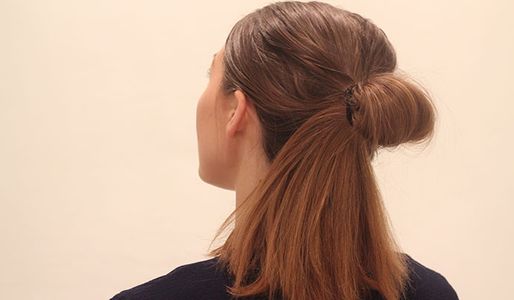 Joe’s fretting about this one and he’s not alone. I try to reassure him and say it's fine, just do waves and he's all 'well it's not as easy as just waves is it'. Finally! A twinkle of impatience, I like it!

“Please don't burn my ears. I'm holding my hands over my ears because I’d rather you burnt my fingers.”

“I can't promise you anything.”

I can feel his hand pinching my hair but it is in fact the GHDs. Gently, gently – I like his approach, but no wave ever came of softly bouncing the straightens about barely touching the hair. At least I’ll come out of this with my ears still in tact though. That’s a massive bonus.

He gets a bit brave at one point and comes sweeping in with them so I try to just say to him try tugging the hair away from my head to create the waves. Strategic! Hey, I went into this with more hair than a horse and I want to keep it that way.

That little tip didn't go down well! “It was waving before you gave me that tip so don't go thinking you've helped. And how long am I supposed to hold these things on the hair 20 seconds?” FML I'm gonna be frazzled.

He then finishes with hairspray but rather than beachifying the look he just kinda pats around and squirts the spray directly into my ear hole, so now I have what looks like an aesthetic plastic ear, which could have actually become a reality at one point.

I think it’s safe to say he lost momentum with this one. I mean it’s static and crimped – two of the worst combos. First Proudlock now I'm one of the Hanson brothers. 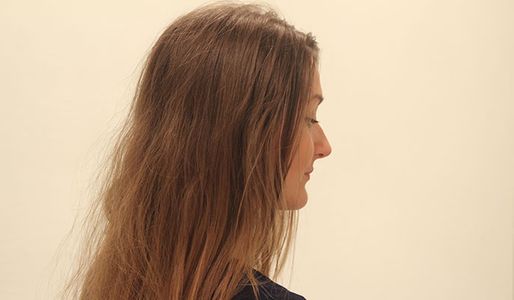 My thoughts? If he could not make me look like a man next time round then that would be great but 3 slightly feminine hairstyles out of 5 isn't too bad!

Cinderella Lips? We Put The New Temporary Lip Fillers To The Test

My Boyfriend Dressed Me For The Week & This Is What Happened