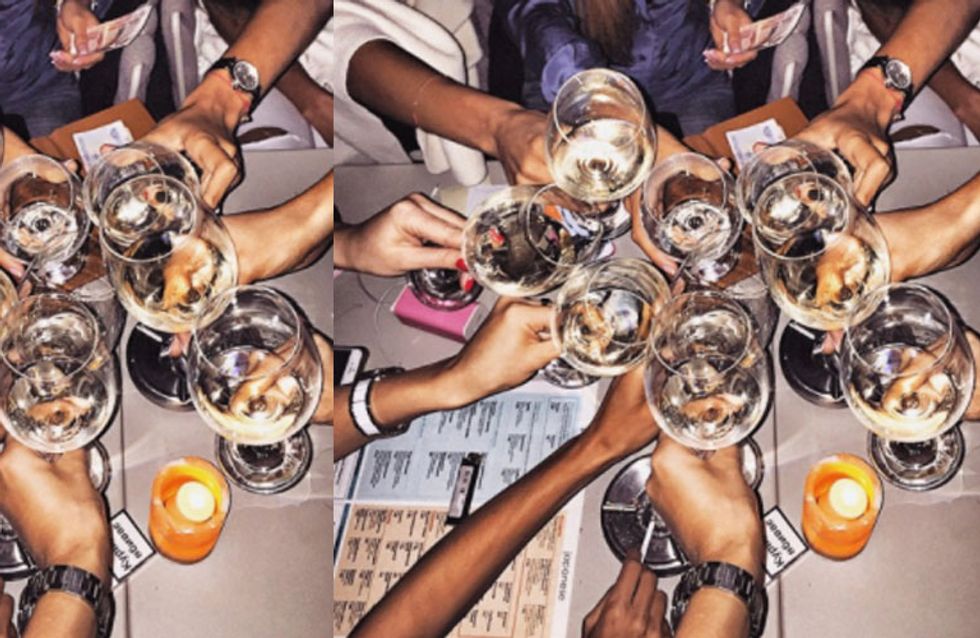 We've all been there: it's party season and you've got 101 social engagements that you can't squirm your way out. The family want to see you as do your girl gangs when all you really want to do is bask in your homemade hygge haven. But it's time to stop stressing and actually enjoy the best time of year made possible by our expert survival tips from Dr Christian Jesson himself which will guarantee you'll glow as bright as your party dress, all season long.

Remember, party season is supposed to be fun. It's not supposed to leave you snotty, sniffling and exhausted. But in reality, of course, we all know it does but you power on through because FOMO, right? To help us deal with the inevitable *bleurgh* ailments we all suffer as a result of parties aplenty we turned to expert TV doc Dr Christian Jesson, who answered all our burning questions about surviving party season cold free.

We can't say he can prevent your hangover though, soz about that.

1. Make sure you get outside even when it's freeeeeezing

It's natural for us to want to curl up and hibernate with a bowl of macaroni cheese when there's frost errrrywhere, and that's fine occasionally, but be aware of falling into that trap too regularly. Dr Christian explains: "If you tend to suffer from lower mood and feeling lethargic during winter, getting some extra light, be it natural or artificially, is really important. Try to maximize the small amount of daylight there is. Even if it’s cold, try to go out on your lunch break to give yourself some natural light because it stimulates the pineal gland in your brain and really helps with your energy levels." Noted.

2. Listen to your body

"We’ve always been told to do some exercise when we're under stress, but new research is telling us that if you’ve got lots going on, cortisol shoots up and that’s the thing that raises your stress levels. If you then go and murder yourself in the gym, you just raise your cortisol levels further, so sometimes having a break from that sort of thing is far more useful. If you're feeling stressed, you can reduce the amount of sweat you produce by washing it off, then you could look at targeting the bacteria themselves by using a product like Sure Antibacterial Odour Protection, to reduce the smell."

​So if you’re in a really busy patch of party season, it’s probably better to give yourself an hour off to relax, rather than hit that er, HIIT class.

"If you’re out drinking, and you have to be out because it’s entertaining season at work, you don’t always need to be drinking alcohol. If that’s a bit socially awkward, then alternate between an alcoholic and a soft drink." And you'll save on the hangover, too. It's a win-win.

Naturally, we're more likely to reach for comforting junk food when winter sets in (see it's not our fault, it's science) but Dr Christian says that a consistently poor diet can actually make us feel even more sluggish and suggests reaching for colourful fruit and veg instead.

​"The more you are aware of potential bad habits, the more you're able to avoid them. A junk food day now and again is absolutely fine, but if it’s becoming a habit every day then you’re going to suffer and struggle. Plenty of fruit and vegetables, and healthy eating as much as you can is crucial during party season."

If you come down with a dreaded winter bug, sometimes it's better to just ride it out at home in your duvet for a couple of days until you feel better instead of dragging yourself into work only to infect your unforgiving colleagues. "Obviously it depends on your job policy, but struggling into work when you're ill is really silly because you’re going to be ill for longer - and you’re going to make everyone else ill, too. I think if you generally are ill with a bug, you need to stay home for a couple of days otherwise you’ll just infect everyone else."

6. Stay hygienic to keep the bugs away

It's time to stock up on that anti-bacterial gel, especially if you take public transport to work. "It’s a myth that you get bugs from getting cold, or going out with wet hair, because it’s bacteria and viruses that make you ill, and they tend to be transmitted more on surfaces. So hand washing is really important. If you desk hop, it’s probably not a bad idea to give the surfaces and keyboard a quick wipe clean because that’s where the bugs will be lurking."

Hey you, put down that jar of supplements - they might be doing less good than you think. "Supplements are very often substitutes for healthier behaviours. If you think you can just pop your multivitamin every day and still eat rubbish and not do any exercise, (as your multivitamin undoes all the harm that you’re doing for the rest of the day) it’s simply not true. It’s far better to focus on the things you’re not getting quite so right, rather than popping a vitamin because it won’t actually do very much."

8. ...and finally, don't be embarrassed to talk to a doctor about a blush worthy problem

If you're burning the candle at both ends, chances are your body will go into overdrive in its attempt to fight off any nasties and that's when some er, potentially embarrassing issues could arise i.e. yeast infections and the like.

But don't be afraid to get it sorted ASAP, even if it is really embarrassing - discussing that discharge to your doc is not a big deal, despite what you might think. Chances are, they've probably heard the same problem five times in that week alone.

​Dr Christian suggests keeping it simple: "People always struggle to try and use correct terminology and that just makes everything difficult - if you’re not really sure, you could write it down. I’ve had patients who have been almost too embarrassed to even speak and they’ve written it down just handed me the paper.

"If you're in a relationship, practise talking about it to your partner, so you get a little bit more used to it. Y​ou could take someone else with you to your appointment, too because they might do the talking for you if you’re really embarrassed. If you’re in a fluster and you’re going to forget things, make a list."

So there you have it, all you need to do now is work your way through that virtual pile of RSVPs...

*Together, Dr Christian Jessen and Sure Antibacterial Odour Protection are tackling the key issues surrounding social odour, allowing you to live life freely and keep on moving*

This Too Faced Setting Spray Promises To Hide Your Hangover

58 Thoughts We All Have At The Office Christmas Party