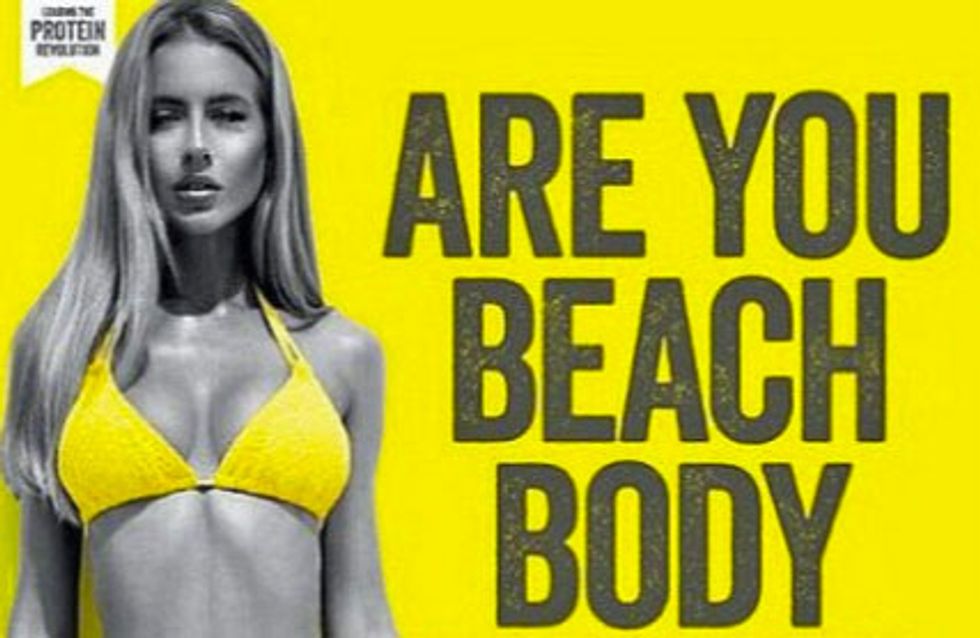 No one wants to see impossibly sculpted bodies staring back at us, making us feel bad about forever making excuses to skip the gym, let alone on the morning commute, so we're welcoming this pledge from the newly-recruited Mayor of London Sadiq Khan with open arms.

There's nothing to make you feel more guilty about not fitting society's bullsh*t body ideals than seeing bikini-clad, Photoshopped models plastered all over the walls as you make your way to work. Especially if you've just scoffed a yummy croissant or two (guilty). But that's exactly what Londoners have had to put up with - until now that is.

The day we never thought would come has finally arrived as the new Mayor of London Sadiq Khan - who has only been in the role for a month - has pledged to ban posters which could cause body-confidence issues, especially among young people.

​It comes after the controversial and now-infamous Protein World campaign sparked a mass backlash last year. You know the one, the ad which so nicely asked us: 'Are You Beach Body Ready?' while a fitness model, wearing nothing but a canary-yellow bikini towered over us, as the brand promoted its various weight loss and diet-supplement products.

The company was accused of promoting and encouraging unrealistic body expectations which in turn demeans women. This particular advert (above) was plastered all over the London Underground network and quite rightly sparked a lot of criticism and protest. In fact, 70,000 people signed a Change.org petition to remove the intimidating ads while some people were so outraged they vandalised the billboards with body-positive messages instead, sparking a big social-media movement.

This advert pretty much sums up everything that I despise about how we treat and value women's bodies. pic.twitter.com/PBZNyn8qop

I committed an act of civil disobedience last week and it felt glorious @VagendaMagazine @EverydaySexism pic.twitter.com/4jl8vbnulU

Look what @GidsG sent me! THE BACKLASH IS HAPPENING pic.twitter.com/F6tYZ3qcOk

Now Khan has taken matters into his own hands, instructing Transport for London to prohibit any similar adverts appearing on the city's transport network in the future.

​He explained: 'As the father of two teenage girls, I am extremely concerned about this kind of advertising which can demean people, particularly women, and make them ashamed of their bodies. It is high time it came to an end.

'​Nobody should feel pressurised, while they travel on the Tube or bus, into unrealistic expectations surrounding their bodies and I want to send a clear message to the advertising industry about this.'

Although this is without a doubt a step in the right direction, it's a baby step as Khan's new pledge is not a blanket ban on ads featuring lingerie or bikini-wearing models. Instead, each poster will be assessed individually on the likelihood it'll send out a negative message regarding body image.

Has Sadiq Khan done the right thing? Let us know your thoughts @SofeminineUK!