by Pascale Day Published on 6 April 2016 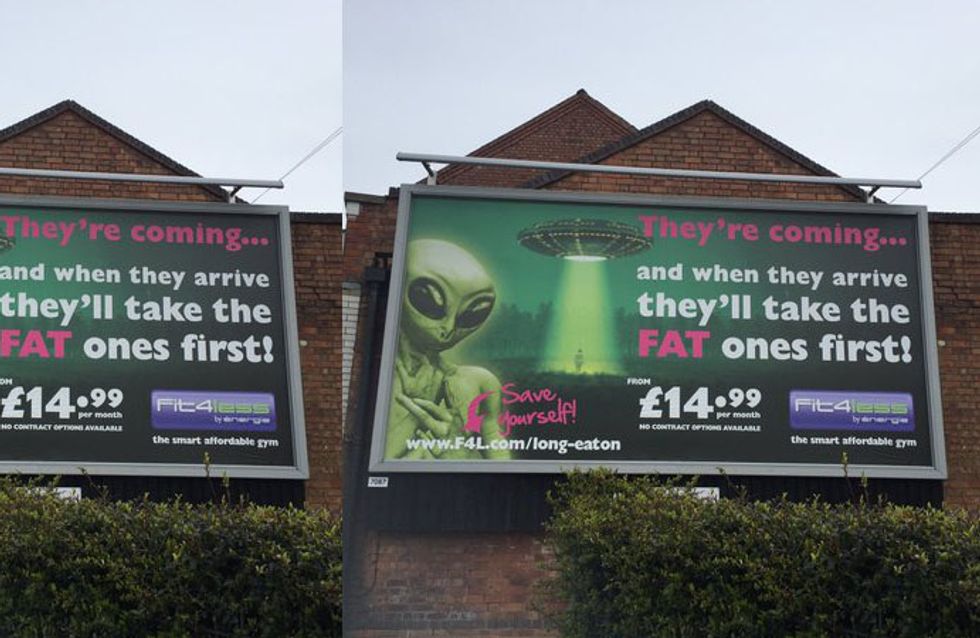 Gym Fit4Less in Derbyshire are causing a stir with their new advertisement - and not in a good way. After receiving complaints for the fat-shaming billboard, the gym have confirmed that they won't be removing the ad, claiming "It was supposed to be a bit cheeky."

If you think of the one place you'd be safe from fat-shaming, where would it be? Perhaps your local gym, where you go to improve your fitness without fear of judgement? Not, apparently, if you're a member of Fit4Less.

The gym's huge billboard advertisement in Sawley, Derbyshire, shows an alien and a UFO beaming someone up, with the words: "They're coming... and when they arrive, they'll take the fat ones first!" Down next to the website address, it says 'Save yourself!' ​

There seems to be a huge chasm between the poster and what the gym is trying to promote. I mean, if a person was nervous about joining the gym before, this ad would increase that fear tenfold. How can one go to a gym with such a prejudice already deeply ingrained in their ethos? The whole idea of a gym is that it's a space that allows people of any shape or size to better themselves by increasing their fitness.

The billboard was spotted by anti-bullying campaigner Natalie Harvey, whose charity, 'Combat Bullying', have now got involved with the removal of the ad. Natalie said of the poster on Twitter: 'Rather than shaming the overweight in society let's encourage & help them @Fit4lessUK this poster IMO [sic] is bullying.'

Since Natalie's tweets, Fit4Less have confirmed that they are sticking to their fat-shaming guns and keeping the poster up. CEO of the company, Jan Spaticchia, told Cosmopolitan how well the campaign is working for them: "The aliens campaign is actually very successful. We aim to get people talking and promote the notion of a healthy lifestyle. We certainly didn't mean to cause offence and we care about the relationships we build with the communities we serve."

Kerry Matthews, who works at the Long Eaton branch, told the Metro "It was supposed to be a bit cheeky, hence the alien image, and grab people’s attention in a couple of seconds. So many campaigns use ultra skinny people and that’s not the reality."

Hmmm, we're not entirely convinced that this is the right way to use people who aren't ultra skinny. Perhaps if they made an inclusive poster that depicted all kinds of shapes we could get on board with it. But not the insinuation that overweight people will be abducted by aliens first. If this is the way advertising is going, please can we go with the aliens too?

What do you think of the poster? Let us know! @sofeminineUK

14 Reasons Weight Training Is The Best Workout There Is