How To Stop Sleep Paralysis And Prevent Those Nightmare Hallucinations 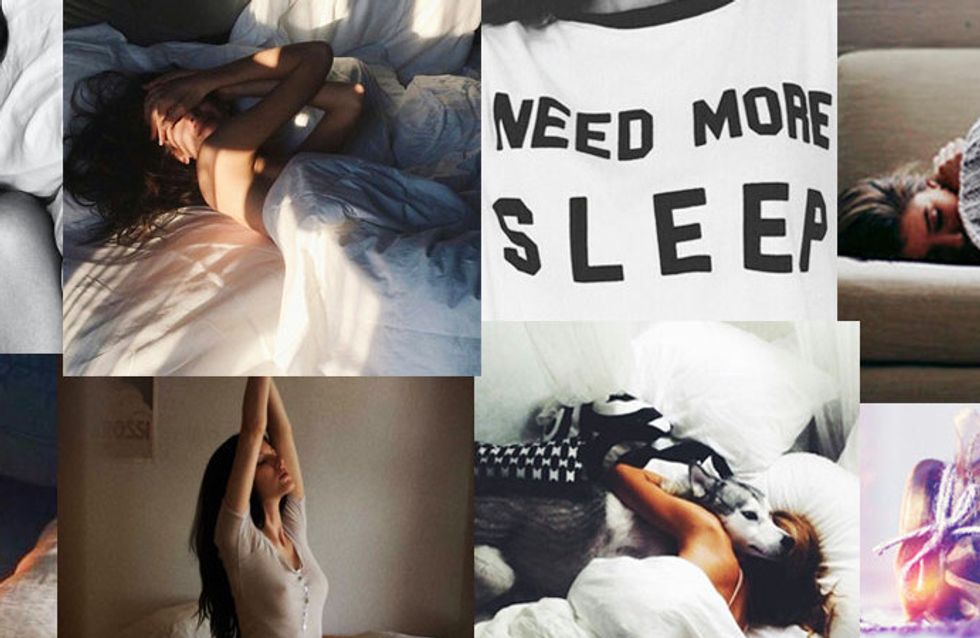 It's 3 a.m. and you wake up to feel the weight of someone pressing against your chest. You panic, unable to move or fend off this intruder. Seconds go by, though it feels like minutes, maybe longer, but your body is completely paralysed. Suddenly the feeling has been lifted, your muscles unlock and you open your eyes only to realise that no one was there; it was just your imagination. If this has happened to you, you've experienced sleep paralysis...

Unfortunately, this terrifying sleep phenomenon happens to almost everyone, according to Michael Breus, Ph.D., clinical psychologist, diplomate of the American Board of Sleep Medicine, and a fellow of The American Academy of Sleep Medicine. Though the experience typically only lasts for 20-40 seconds, sleep paralysis can seem like a lifetime. When the fear overcomes you, even the shortest episode can make the world stop and have you feeling as if you're in slow motion.

What Is Sleep Paralysis?

So aside from being absolutely terrifying, what is sleep paralysis exactly? According to Dr. Breus, this condition typically occurs as a result of sleep deprivation though it can also be associated with narcolepsy. Part of what sleep specialists recognise as the "narcolepsy triad," sleep paralysis is often linked with cataplexy and hypnagogic hallucinations. Feeling as if they've woken up mentally, individuals who experience sleep paralysis are physically unable to move.

"It's not particularly dangerous," Dr. Breus says. "What we think it is — it's where your brain is still partially in REM sleep. During REM sleep all of your muscles go through what’s called REM atonia, and what that means is that paralysis occurs so you don’t act out your dreams."

REM sleep occurs approximately every 80-120 minutes during a person's sleep cycle, and much more of it takes place during the last third of that cycle, usually in the early morning. Although Dr. Breus says it's sometimes possible to mumble or talk, and that sleep paralysis can occur with eyes open or closed, those who experience it simply have to wait for the atonia (muscle weakness) to cease on its own.

"When you wake up your brain often times isn’t disengaging from REM as quickly as your body does," Dr. Breus says. "So let’s say you’re in the middle of REM sleep and your alarm goes off. Well the alarm is going to tell the physical part of your brain, 'Hey time to get up.' And your body is going to try to get up whereas the unconscious part of your brain, which also happens to deal with REM, is going to say, 'Hold on a second it’s going to take me a while to get out of this,' and there’s a lag."

That lag, Dr. Breus says, is when we experience sleep paralysis along with the hallucinations many describe as the sense that there's a presence in the room. From feeling as if someone is holding them down, to believing they've actually witnessed a figure of another person, many individuals find that sleep paralysis may explain away alleged supernatural sightings.

Although there's no real explanation behind the "intruder" hallucinations that sometimes accompany sleep paralysis, it's certainly alarming no matter how often you go through it.

​Yet despite all this, Dr. Breus says there's that there's no need to be fearful of sleep paralysis as it's a completely normal occurrence for those who are sleep deprived.

How to Prevent It

Unfortunately, while there's no "cure" once already in that state of paralysis, there are a few ways to help prevent it from happening in the future. And thankfully it's actually quite simple: get better quality sleep. Whether that means increasing the number of hours you sleep to do so, avoiding alcohol ingestion before bed, or watching your caffeine intake later in the day, according to Dr. Breus, avoiding sleep paralysis is easy. If nothing seems to work however, and you continue to experience sleep paralysis frequently, Dr. Breus recommends seeing a sleep specialist.

100 of the Best Quotes to Live Your Life By:

15 Thoughts Everybody Has When They Can't Sleep

How to Fall Asleep Fast: Sleep Solutions for Every Type of Person

Follow us on Pinterest!
You might also like
Positive Quotes To Get You Through Your Day
by Pascale Day
17 Celebs Who Have Spoken Out About Their Mental Health
by Pascale Day
Motivational Before & After Weight Loss Pictures
by the editorial team
Inspirational Tips To Get Your Weight loss Mission Started
by the editorial team
Pulled An All-nighter? 15 Ways To Survive On Less Sleep
by Vivian KELLY
9 Things That Will Help You Sleep Like A Damn Baby
by Emmy Griffiths
A Bad Night's Sleep Could Be The Reason You're Gaining Weight
by Helen Turnbull
22 Things Everyone Who Lives To Sleep Will Understand
by Rose Adams
5 Reasons You Need To Sleep Naked
by Cliche Wynter
How To Fall Asleep Fast! Sleep Solutions For Every Type Of Person
by Vivian KELLY