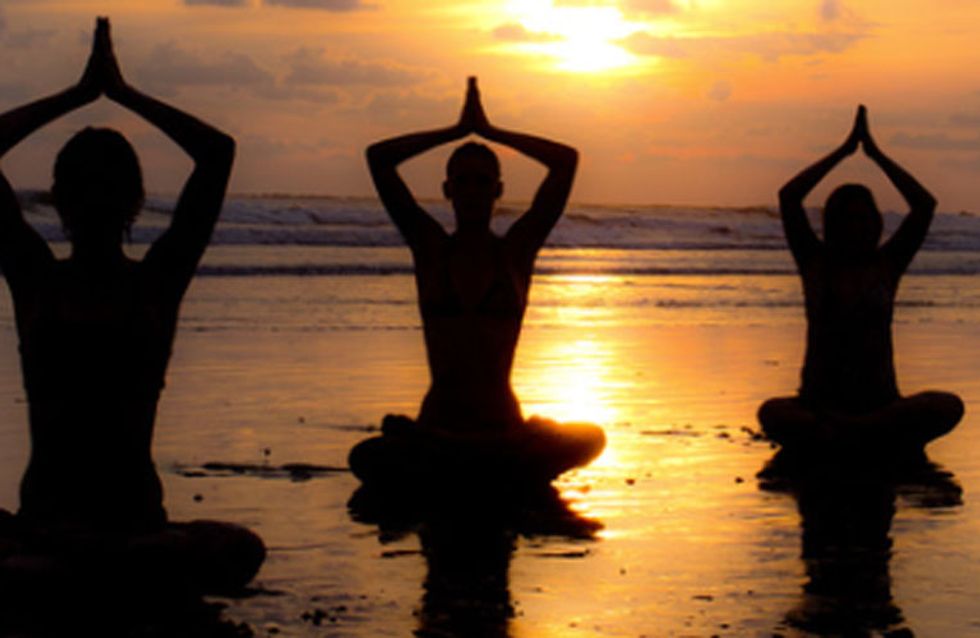 Not a week goes by without some sort of beauty/health/fitness/all of the above trend doing the rounds on social media and the latest offering is a treatment named the Iyashi Dome which claims to burn up to 600 calories while you sit back and relax. Sounds too good to be true? We were proved otherwise.

As a fully-fledged detox virgin, I approached the boutique health clinic - MyDetoxDiet in North Greenwich, London - with a certain amount, okay kind of a lot, of apprehension. I was booked in for a 30-minute session in the city's only Iyashi Dome - an infrared-ray-omitting casing that claims to burn up to 600 calories (the equivalent of a 20km walk) while you sweat out toxins which, in turn, purifies the skin.

I reluctantly changed into the designer paper pants, which weren't too dissimilar to a ball bag (no lie), and shimmied myself into the dome on my front with my head and arms uncovered. The heat is progressive and as someone who has a low tolerance for feeling sweaty, I was pleasantly surprised to find the experience totally comfortable. It doesn't take long for your body to start perspiring and having beads of sweat drip down my back and everywhere else felt oddly satisfying.

I spent fifteen minutes lying on my front before the ever-so-helpful beauty therapist returned to the room to inform me it was time to turn over. The penetrating heat and calming soundtrack had me feeling as far away from the hustle and bustle of the capital city as is possible (aside from the murmur of traffic from a busy, neighbouring road) and I relished the rare opportunity to completely zone out from everyday life.

Admittedly, as the final five minutes approached I was crying out for the treatment to end as I struggled to cope with sweat pouring out of places I didn't even know could produce sweat. By the end, I'd produced enough to fill a small paddling pool and I can only imagine it's how marathon runners feel, minus the aching muscles.

Thankfully, the dome was removed after thirty minutes to allow you cool down completely and it was very refreshing. I slowly returned to my feet and the results were instantly noticeable. My skin felt as though it'd had a deep clean and my head was clear.

The Iyashi Dome is a treatment derived from Japanese culture and is the modern-day equivalent of a historical practice named Suna Ryogo which involved participants burying themselves in sand near hot springs in order to expel toxins.

The dome omits infrared rays which penetrate the body by up to 40mm, encouraging your body to sweat out all the bad stuff, created by stress and pollution etc., from your bloodstream. The technology is a revolutionary, organic-based far infrared therapy that produces perspiration which makes it possible to purify, regenerate and decontanimate the body.

All in all the experience was a positive one although the amount of calories burnt during the session was not the most noticeable result despite the weight-loss benefit being one of the main attractions. However, my skin felt cleaner and softer than ever, despite not having one product slathered on me. The therapist remarked I looked 'positively glowing' which just goes to show going back to basics pays off.

My body was craving water immediately afterwards even though I'd made a conscious effort to keep hydrated throughout but when you're losing a considerable amount of water, you need to replace what's been lost as it plays such a vital part in our day-to-day health.

I genuinely felt like a different person - stress was a foreign concept and I was ready to take on whatever Monday threw at me with a 'can do' attitude.

To sum up, I'd definitely book in for another appointment and recommend it to anyone who needs a little rest and relaxation in their lives but it's not for the claustrophobic sort, although you do have the option of cutting the treatment short if needs be but you obviously won't feel the maximum benefits.

Got any health or beauty treatments you want us to try? Tweet us @SoFeminineUK

We Trialled The Oxygen Facial Celebs Are Obsessed With

Growing Old Gracefully: How And When To Start Your Anti-Ageing Routine

The World's Healthiest Food? 10 Reasons You Can Live Off Avocados Alone