If you don't know who Ashley Graham is by now: where have you been? Fashion's curvy It Girl has been changing the way we look at the modelling industry for the better. In February she became the first plus sized model to grace the cover of Sports Illustrated's Swimsuit Issue. Her meteoric rise has been a triumph for not just curvy girls, but regular girls everywhere. Here's how Ashley dresses her curves to maximum effect.

It's safe to say that Ashley Graham is a big deal right now. She's taking the fashion world by storm and, quite frankly, we're into it. Ashley only made her New York Fashion Week debut in 2015, but she's already taken over the catwalk, creating her own lingerie collection with plus-size retailer Addition Elle and starring in the show. Not only that, but she's also appeared in DNCE's music video for 'Toothbrush' as Joe Jonas's love interest (we're totally 'shipping it) and she's a fierce supporter of body activism.

Ms Graham is the ultimate role model, not just for those who are curvy, but those who have regular bodies: big boobs, cellulite, thighs that rub together - this lady is here for us all. And not only is she our woman crush errryday, she's the perfect example of how to dress in a way that totally complements your body shape. So check out her style file below for some curvy gurl inspo. 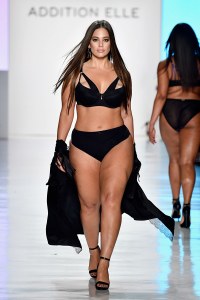 Pascale Day
…
100 shares
From hair ideas to outifts, look no further for your daily inspiration