by Pascale Day Published on 3 November 2016 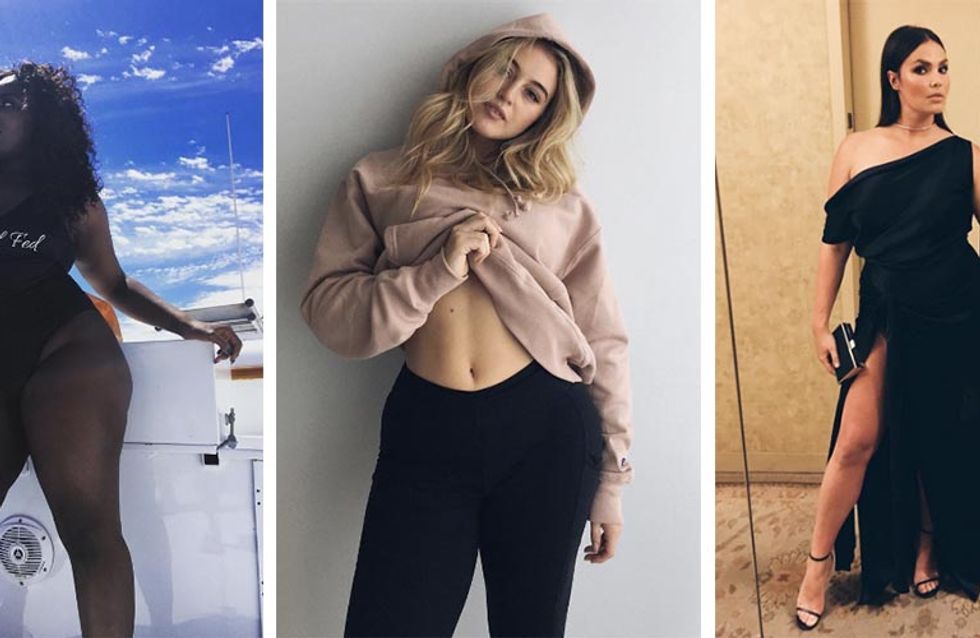 2016 is the year of the curve. Plus sized women have been taking over the fashion world and they ain't showing any sign of slowing down. But who are the people behind these show-stopping curves? From newcomers like Iskra Lawrence to favourites like Ashley Graham, here are all the models taking the world - and Instagram - by storm.

You may have noticed 26-year-old Iskra coming into focus this year, but truth is that Iskra has had a cult following way longer than you think. She's a model for American Eagle Outfitting's lingerie brand Aerie, and is a managing editor at Runway Riot, a fashion site that celebrates women of all shapes and sizes. There are many strings to this lady's bow! Iskra is hot on body shamers, and is totally prepared to shame them right back. In fact, she caused quite a stir this April when she posed on a bed of crisps after haters called her a "fat cow" on Instagram, firmly setting her status as our hero in the SoFem office. She regularly posts photos of her shoots on Insta and videos of her workouts, so you can tailor your gym routine to get a hot bod like hers. Hallelujah! Expect to see much more from Ms Lawrence in 2017.

Ya'll know Ashley Graham by now, right? If not, let me get you two acquainted: She's the world's fashion darling right now. Best known for her work with Lane Bryant, she has been propelled to supermodel superstardom, appearing in Vogue, Harper's Bazaar, Elle and Glamour. She became the first plus-sized model to appear on the cover of Sports Illustrated, with us curvy girls celebrating the world over. But Ashley is now a celebrity in her own right, with chat shows appearances, a cameo as Joe Jonas's love interest in DNCE's video for 'Toothbrush', and over two and a half million followers on Instagram firmly under her belt. If you hadn't noticed her everywhere before, you will now!

Whilst modelling for the clothing brand Lane Bryant has been a steady income for her since 2000, Candice Huffine came to prominence in 2011 when she featured alongside Robyn Lawley and Tara Lynn for Vogue Italia - their first plus-sized cover in over 10 years. She was then chosen as the first plus-sized woman to be in the prestigious annual Pirelli calendar. Her modelling career began in her sophomore year of high school when she visited a bunch of agencies in New York with her mum - and was rejected by all but one. She has said that she was signed as a plus-size model at a time when even she didn't know what it meant. Just look at her now! She's one of the greats. And for anyone who thinks that plus-size can't be healthy: Candice shut her haters DOWN earlier this year when she trained for and ran a half marathon in March. Get it, gurl!

Alessandria Garcia-Lorido may have celebrity roots (her dad is The Godfather and Ocean's 11 actor Andy Garcia), but she's a star in her own right. She's featured in plenty of well known campaigns for the likes of H&M, Forever 21, Vogue Italia, and SLiNK magazine - it's no surprise that we're seeing her everywhere considering she's currently signed to four modelling agencies: IMG New York, Natural Models LA, Milk Management London,and D'management Milan. So there's no chance of nepotism when it comes to Alessandria's modelling - she's a self-made woman.

Many will recognise Ms Brooks as Orange Is The New Black favourite Taystee. We're so excited that, after binge-watching the fourth series over the space of a day back in June, we can finally get another dose of Danielle, albeit via a different medium. Many will have seen her performing as Sofia in The Colour Purple on Broadway, and now she's a fully-fledged model for plus-sized brand Lane Bryant. And as if we couldn't be more enamoured with her, she brings a fun, vibrant edge to their latest campaign. Can we just be best friends now, please?

"She's got the eyes of innocence, The face of an angel, the personality of a dreamer & a smile that sparkles like the 4th of July!" 📷: @jmilagrosplus

Liris Crosse is often hailed as the plus-sized Naomi Campbell, and it's not hard to see why. As a UK size 18, Liris, originally from Baltimore, was told to lose weight when she started out as a model. But did she give in to criticism? Hell no! And not only is she now modelling for the likes of Glamour and Seventeen, but she's also featured in music videos for Jennifer Lopez and Jay Z! If that's not enough, she's also breaking down some pretty significant boundaries: she was the first black model to star in the Goddess Lingerie lookbook in 2015. Pretty cool, huh?

Naomi Shimanda has been a model since her early teens, saying in an interview with The Guardian "I started modelling when I was just 13. I was shooting sexy before I even kissed a boy." She began her career as a "regular" model, but soon realised that maintaining a size 8 figure was just not for her - dieting was making her depressed. She said: "I wanted to be the poster girl for eating and enjoying it" - we hear that sister! That's our dream too! We hope to see her eating and modelling more in 2017.

Who's your favourite plus-sized model? Let us know! @sofeminineUK