You can't fight it: Bella and Gigi Hadid have some of the best damn genes in the biz. God bless Yolanda Foster and Muhammad Hadid because they have made two of the most beautiful females around. But whilst Gigi steams ahead with her hot 1D boyfriend and great cheekbones, we want to take a minute to appreciate her younger sister Bella.

If looks could kill, we'd all be dead right now. Bella Hadid has that kinda face that can go from cute 'n smiley to fierce in a matter of seconds. We first saw Bella on her mum's TV show The Real Housewives of Beverly Hills, but since has joined her sister Gigi in the fashion industry, modelling for Versace, Givenchy and Chanel.

Bella and Gigi were always destined to be famous. With parents that comprise of a model and a millionaire real estate mogul, it would have been hard to stay out of the limelight. But Ms Hadid is a star in her own right. As a (younger) teen, she was a nationally ranked equestrian, and was looking to go to the Olympics, but her dreams were dashed when she was struck down with Lyme disease in 2013. She then was set to go to university to study photography in New York, but when your modelling career takes off the way Bella's did, you just gotta go with it. She dropped out of uni after one term to pursue modelling, and the rest is history. Take a look at Bella's best fashion moments below. 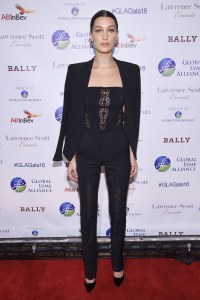 Take A Bow! Rihanna's Style Game Through The Years