Is This The Most Tasteless Thing Vogue Has Ever Done? Magazine Glamorises Domestic Violence

While it might have been the intention of Franca Sozzani to raise awareness of violence against women, the latest edition of Italian Vogue has outraged some with its graphic depiction of women in horror-movie situations which are supposed to echo the realities of domestic violence.

Vogue used to be known as the ultimate in style and good taste, but in recent times its reputation is at risk of becoming perhaps a little try hard. Last month US Vogue got tongues wagging after placing Kim Kardashian and Kanye West on the cover, and now Italian Vogue has caused a stir with a photoshoot that seems to glamorise violence against women.

Editor In Chief, Franca Sozzani has dedicated the April edition of Italian Vogue to raising awareness of domestic violence but the way in which the magazine has depicted domestic abuse can easily be accused of glamorising violence against women.

In a graphic photoshoot which aims to be cinematic, fragile-looking models pose as victims of violence, clad head to toe in designer brands like Prada and Alexander Wang. And seeing as this is Vogue, the dirty, humiliating and ugly truth of domestic violence is over looked by making the violence look arty and atmospheric. (How very post modern).

If you've ever been a victim of domestic violence (1 in every 4 women in the UK has) then you'll likely not appreciate the way Vogue has handled this issue.

In one photo a model lies broken (but still beautiful) at the end of a staircase after being pushed down it, with blood pooling in her red hair (hey - it's good to match right), in another, a model in an S&M inspired outfit is cowering under the stairs as a man in a blood stained coat descends to presumably rape (and kill) her.

While the images aim to be cinematic and try to evoke the horror movies and detective series that our culture is saturated with right now, you could argue there is a better way to raise awareness of domestic violence than to endorse cliched imagery and blend it with fashion. There is no beautiful side to violence against women, and there is no outfit preferable for getting beaten up in or murdered in either.

A missed opportunity for Vogue to do something edgy and poignant and original no?

Sozzani interprets the images differently. In an interview with British newspaper, The Independent, she said: "Seeing the pictures when I was coming out of the shoot, it was everywhere on the TV in Italy, but even all around the world, how many women are every year attacked, abused and killed? You know, in a small country like Italy only last year [the figure] was 1,700 women and almost 130 that were killed, so it's huge: it's more than two women a week.

"And so I said… why don't we give that message again, especially that the horror of life is bigger than the one that you can see in the movies. This is really a horror show, what we are looking at and what we see every day in every newspaper around the world is how fragile the woman still is today, and how she can be attacked, can be abused, can be killed.”

What do you think? Are these photos a collection of tasteless and trite caricatures? Or has Italian Vogue made something special?

If you're affected by domestic abuse or emotional abuse call Refuge on 0808 200 247 or visit www.nationaldomesticviolencehelpline.org.uk

See more photos from the shoot: 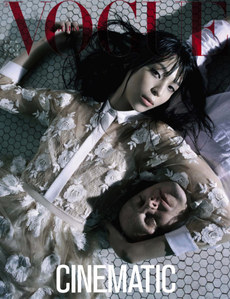