First look at Kate Moss as a Playboy bunny

Back in September, camp Playboy confirmed Kate Moss would be gracing the cover for their 60th anniversary issue in a dare-to-bare photo shoot. Now, the first pic has landed and it doesn't disappoint. Clad in full bunny get up (ears and all) and on all fours in five inch heels, she might not be naked but she sure does nail the Playboy pose.

The wait is over, Kate Moss has made her debut as a Playboy bunny in a first look pic from her dare-to-bare photo shoot.

In June, her hairdresser let slip that she had been posing up a storm for fashion photographers Marcus Pigott and Mert Atlas but it wasn't until September that Playboy confirmed the hot gossip.

The London It girl is set to appear in the January issue to mark Playboy's 60th anniversary but just when you thought you'd have to wait until 2014 to see her bright eyed and bushy tailed, this happens.

She's got down on all fours and bunny tailed-up for her editorial with Playboy and boy does she look fierce at (nearly) 40.

Most women couldn't think of anything worse than stripping off for their 40th birthday but that's exactly what super Kate Moss is doing.

Cue the curved back, bedroom eyes and feline glance, nothing is beyond Mossy not even velveteen cuffs, bunny ears and sky high stilettos.

Hugh Hefner said: "She’s a worldwide celebrity and iconic and crosses the boundaries from sexual imagery to upscale modelling. It’s a natural for us."

The December issue is out next Friday featuring Kate's first Playboy image but we'll have to wait till January for the grand unveiling.

Check out more bare-all editorials from Miss Moss! She's certainly not shy about taking off those clothes! 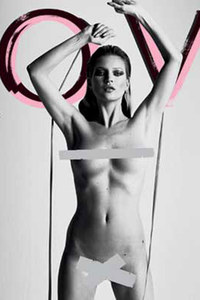 How do you rate Kate Moss' Playboy bunny shoot? Tweet us @sofeminineuk

Sign up to get involved!
You might also like
Donatella Versace: the designer, with friends, who revolutionised the fashion world
by Ayla Soguksu
The brands that celebrate diversity and break the codes of beauty
by Amy Denman
Victoria Beckham's best looks: copy the style of the 'Posh Spice'
by Ayla Soguksu
Lady Diana VS Kate Middleton: the looks in comparison
by Ayla Soguksu
Kate vs Meghan: who wore it better?
by Charlotte Hoddge
The most daring dresses worn at the Golden Globe Awards
by Charlotte Hoddge
When Runway Models Fall On The Catwalk!
by the editorial team
The massive rose gold trend
by Charlotte Hoddge
Meghan Markles best fashion moments throughout the years
by Charlotte Hoddge
Jennifer Lawrence Style: Her Best Outfits To Date
by Lareese Craig