10 Times Gigi Hadid Was #Goals In Every Way

by Pascale Day Published on 10 February 2016 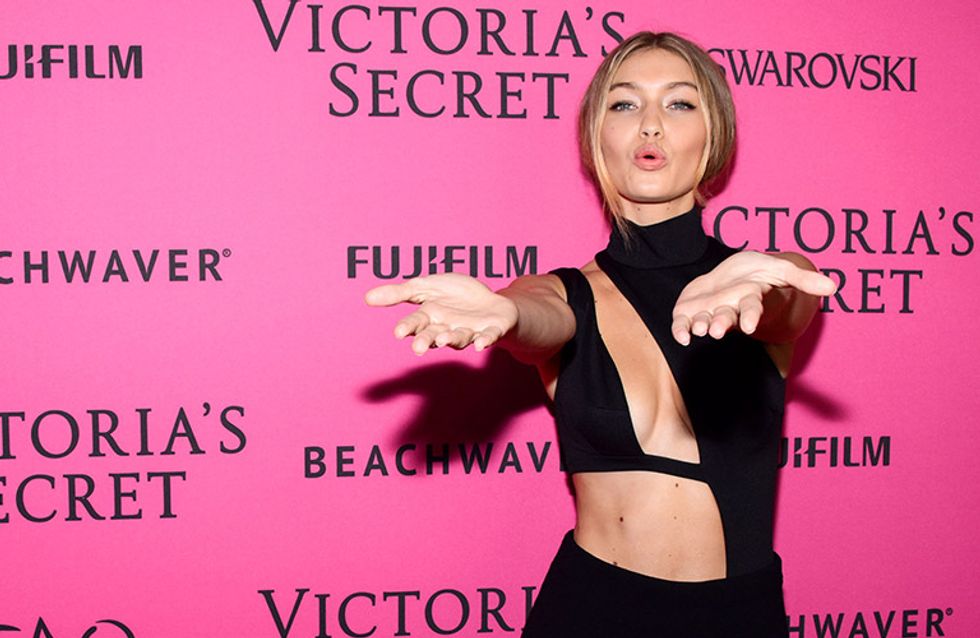 If you haven't heard of Gigi Hadid, you must have been hiding under a rock for the past year, in a place where they don't deliver fashion mags. Gigi, daughter of Real Housewives star Yolanda Foster and super-rich real estate developer Mohamed Hadid, is seriously hot right now and her 2016 has got off to a flying start with her new naked shoot for Vogue. It made us weep into our pancakes. Here's 10 times Gigi gave us life goals!

In her latest Vogue shoot

Gigi's new Vogue cover has barely hit the stands and it's already the most talked about thing of this week. She stripped off for the French edition of the editorial fashion empire, and now we have 100% been using this picture as our 2016 fitspiration. Can we get a collective bow?

That time she turned up to the Zoolander 2 premiere...

And totally stole the show with her punk rock hair goals and floral get-up. The red purple carpet was transformed into a catwalk runway where both Gigi and bezzie pal Kendall showed everyone how it's done. Miss Hadid looked incredible as she led the fashion pack in her gorgeous asymmetric Marc Jacobs SS16 dress. Swoon fest.

Last September Gigi took to Instagram to shame the body shamers who had been quick to comment on her appearance. It's easy to forget that Gigi is just a 20 year old with insecurities like the rest of us. But, unlike us, she's facing unfair scrutiny from all angles and from people who don't know her but assume to. "I have boobs, I have abs, I have a butt, I have thighs," she says in her Instagram post, "I represent a body image that wasn't always accepted in high-fashion before." Luckily, Miss Hadid is a professional, with confidence, and she vowed to twirl on them haters, to coin a 'Yonce phrase.

Let's just take a moment to appreciate Gigi's Insta page, shall we?

She was in Taylor Swift's video for Bad Blood

It's universally known that Gigi is part of the elite that is Taylor Swift's crew, so when the video for Bad Blood arrived, we were fangirling all over the shop with excitement, especially to see our gal Hadid as Slay-Z in the vid with her ninja compact mirror and trusty bulldog. Slay, Gigi, slaaaaaay.

She was also in Zayn's new video as "The Girlfriend"

Introducing another great celebrity combo 'Zigi'. Zayn released his first solo single Pillowtalk at the end of January, along with a majorly saucy music video which features one scantily-clad Miss Gigi Hadid. It's steamy stuff. There's kissing. There's touching. There's... vagina flowers? Anyway, if we're being honest we're not sure who we fancy more out of Zayn and Gigi. It basically puts all those rumours to bed about whether they're a couple or not.

Her ad for Tom Ford perfume

Gigi stripped off yet again in a campaign for Tom Ford's Velvet Orchid perfume by photographer Mario Sorrenti and, although she looks like she's stuck on the inside of a Quality Street big purple wrapper, she does it so effing well.

Her friendship with Kendall Jenner

If you thought Zigi was the only name coupling we've got under our belt then you would be wrong. Let us introduce you to Kengi. Kendall and Gigi are probably the most stylish besties known to man. The pair rose to supermodel stardom at the same time and, when they're not hanging around with their current squeezes, they're spending all their time together. Gigi even explains how they are kind of related - she tells Vanity Fair: ​"My mom married David [Foster], who was married to Linda Jenner [now, Thompson], who was Bruce Jenner‘s ex-wife [now Caitlyn Jenner]." Isn't that the best friend dream?

Gigi made her Victoria's Secret runway debut in 2015 and she did not disappoint. She walked that walk alongside her best gal Kendall, as well as veteran angels Adriana Lima, Candice Swanepoel and Lily Aldridge. Gigi's main outfit was a kind of fireman get-up that immediately made us want to get down to B&Q and throw on some yellow overalls. And I think it's safe to say we were all very jealous when performer Selena Gomez got to give Gigi a smack on the bum.

Her mysterious new bob at the AMAs

Last year the world was puzzled when Gigi showed up at the American Music Awards a good few inches of hair lighter, and the post-awards show went back to having long hair. How had her hair managed to grow that quickly? Was there some special hair-growing elixir that only supermodels know about? The answer is no. Gigi's hairdresser explained that Hadid's lob was thanks to a half wig that was cut and then attached to the back of her head. Easy, then.

Got any other Gigi moments that you think need to be added to the list? Let us know! @sofeminineUK

You might also like....Gigi Hadid Shuts Down Body Shaming D*cks In The Best Way

9 Things You Need to Know About the Victoria's Secret Diet