by the editorial team Published on 13 February 2015 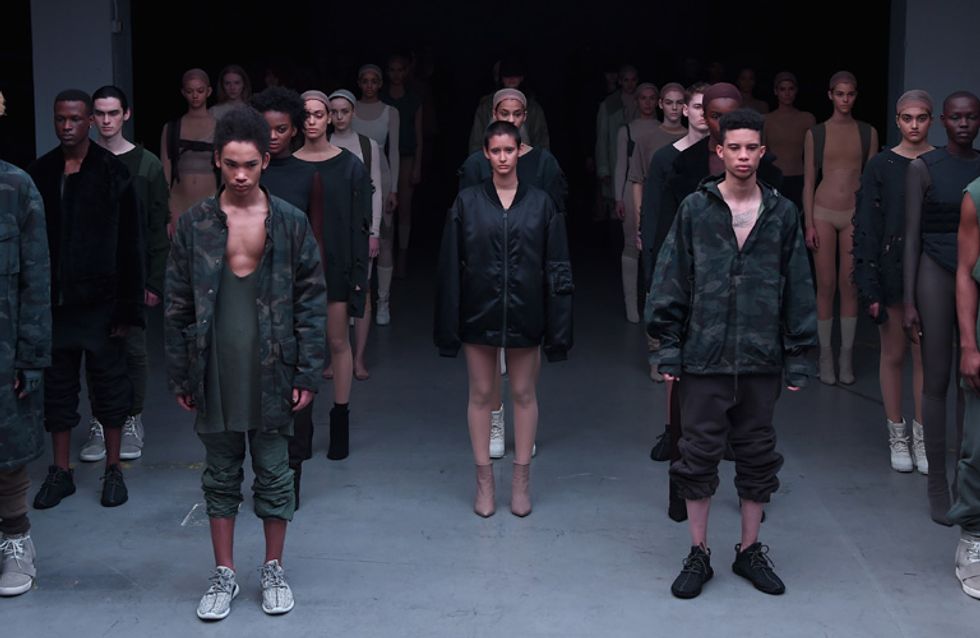 Kanye West, the self proclaimed creative genius, debuted his Adidas collection yesterday at NYFW. And of course in true Kanye style, the show was full of OMG moments. Thank you Kanye for being the man you are, and always giving us something to talk about.

The collection called Yeezy Season 1 suggests they is more to come, and if its anything like this show, we can't wait.

Possibly the best FROW ever!

It was a star studded event, wife, Kim Kardashian, and celebrity besties like Jay Z, Beyoncé, Rihanna, A$AP Rocky, Diddy, Cassie, Alexander Wang, and most importantly the queen of fashion Anna Wintour were all at the show.

Just look at her, casually playing with her famous mum at her dad's NYFW show.

Anna Wintour clearly wants nothing to do with this situation.

Let's face it, she still won! She proved to us that she is our superior and can wear and pull off hosiery fashion. #OnlyTheBrave!

So we are not sure about the women's range, maybe its because we can't get away with wearing head to toe tights , and the ladies head wraps are what what I wear to bed. But the mens collection is not bad, not bad at all. Hello pectorals!

The song is moody, kinda like Kanye, and Sia can do no wrong. We kinda like it.

Look closely and you can see Anna Wintour, next to Kim still seating whilst everyone else gives a stand ovation. But then again its Anna Wintour we can't expect her to stand.

Kanye's fav women in one picture

We are pretty sure Kanye will be getting this picture framed. Kim, North, Anna and Beyonce in one picture. As we all know by now , Kanye is the leader of the Beyhive and Beyonce's number one fan.

How are you feeling about Kanye's new collection? Tweet us @SofeminineUK

​This article was written by Tolani Shoneye. Tweet her @tolly_t

What If Kanye West Tweets Were Motivational Posters

30 Struggles Only Fashionistas Will Understand