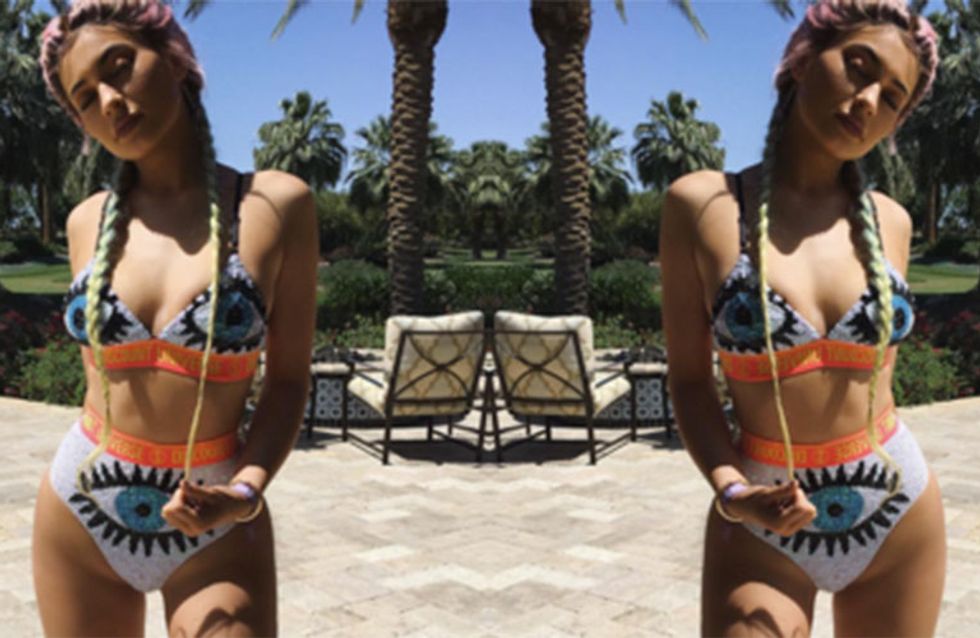 Fashion chameleon Kylie Jenner's daring sense of style often divides opinion. She's not shy when it comes to trying out different trends, showing off some skin, and experimenting with colour - and we don't just mean her barnet. But this time her outfit has got us all talking for a totally different reason...

Being photographed in the same outfit on two separate nights out is bad enough cos, hello... If it goes on Facebook it's basically never to be worn again, so just imagine if you were getting papped 24/7. NOT. AN. OPTION. But ​it seems that it isn't just us mere mortals who struggle picking what to wear each day - even Kylie Jenner needs a helping hand every now and again!

K Jizzle is a girl after our own heart, as it appears she's been turning to style savvy fashion bloggers for inspiration for one of her many Coachella outfits. We can't really blame her cos jeez, the outfit in question is one HELL of an outfit. I mean, surely a split that high can't be comfortable for the female regions? *eek*

Kylizzle mega fans were quick to notice the resemblance her outfit choice had with the one previously worn by super stylish New Zealand instagrammer Brit Day. It is pretty identical - they even have the same #hairgoals worthy rainbow braids. *Awks*

​Kyles fans weren't shy about commenting to let her know about it either. Well they do say that imitation is the best form of flattery, right?

But kudos to Brit, who shook off the speculation like a total pro, by posting a 'who wore it better' comparison pic on her account, hashtagging Kylizzle as #shesababe.

We think both ladies look amazing, however we recks it's still a bit too chilly for us to follow suit just yet. But if you wanna rock the look too, you can order the two-piece here... just as soon as it comes back in stock that is!

Would you rock this daring look? Let us know @SofeminineUK

23 Things That Go Down When Shopping In Zara

The Best Festival Fashion Inspo To Make You Say Coachella-Yeah

10 Style Staples Every Woman Should Have In Their Wardrobe