Melania Trump's Beauty And Style Evolution: From FROW To FLOTUS

Her taste in men may be *questionable* but it's high time we cut Melania Trump some slack and gave her credit for the one thing her significant other can't f**k up. While the former model is yet to earn the respect owed to departing FLOTUS Michelle Obama, you can't fault her impeccable ability to look the part of the First Lady of The United States in sartorial terms despite what her behaviour at Trump's inauguration may have suggested.

What Melania Trump sees in misogynist and alleged serial sexual assaulter Donald, we'll never know. But what's not up for debate is her slick sartorial sense. From her inaugural outing as the 45th First Lady of The United States at Donald Trump's recent inauguration - for which she chose a powder blue dress, custom-made especially for the event by American designers Ralph Lauren - way back to her days as his only accessory at every party worth attending, she never looks less than picture-perfect. Here we take a look back at Melania's style evolution through the years: 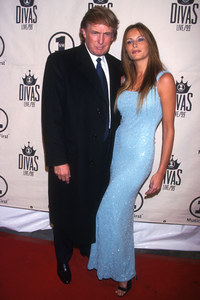 Fishnet Tights Are Back Everyone, And We're Totally Here For It

Helen Turnbull
…
For all the best videos, memes and shareable news!