With the onslaught of award shows we're about to experience over the next few months, we thought it wise to brace ourselves for endless chiffon, tulle, and sparkle by the buckets. But at last night's People's Choice Awards something refreshing happened. The universe aligned and a select number of stars opted out of restricting gowns and went with functional pants instead. It was glorious.

We love it when celebs go against the grain and embrace whatever style makes them the most comfortable on the red carpet. If they're going to have to sit through hours of acceptance speeches, lose in their own category, then they might as well be comfortable doing it, right? Also, we're only a week into the new year, which means they're probably still recuperating from the holiday festivities.

Anywho check out what these daring stars wore at last night's 2015 People's Choice Awards. Dresses were simply not an option.

Ellen DeGeneres killed it in white

And knows she's doing the damn thing. Look at her.

Now we can't wait for an affordable version to this look to land on ASOS. Our credit cards are ready.

Bella Thorne was perfection in Armani

Her style is impeccably chic and sleek for a 17-year-old. Loves it.

Kaley Cuoco kept it simple in black and white

She wore a Peggy Hartanto jumpsuit that flaunted her amazing body. We're not working hard enough in the gym, clearly.

A neutral Elie Saab jumpsuit was the call for Ellen Pompeo

Well executed on her end.

Here's Iggy proving that if you thought crop tops were so last year, you were wrong.

Then gave her best Beyoncé during her performance

Melissa McCarthy nailed it in all black

All black everything wins yet again.

Monica Potter was cool and chic

There she is casually posing with one hand in her pocket. Girl has no worries and we're here for it.

Sadie Calvano added a pop of intrigue with a camo blazer

Kudos to her for letting us know that camo isn't strictly reserved for G.I. Jane and can certainly be worn on the red carpet.

See what the rest of the stylish celebs wore here: 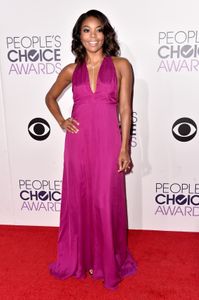 Who had your fave look last night? Tweet us @sofeminineUK!

10 Ways To Keep Your Chic Together During The Deep Freeze

How To Dress Classy, Modern, And Youthful ALL At Once