The best and worst dressed at the GQ Awards 2013! Plus what was Emma Watson wearing?!

The GQ Awards were in full swing last night and while it might be a man's mag event, it was the women on the red carpet that were getting everyone talking. From Claudia Winkleman's OMG tan malfunction, to Emma Watson's WTF outfit, the awards didn't disappoint in the style stakes.

The GQ Awards are always a well-heeled affair and last night was no different. This year's red carpet saw plenty of flashes of midriff and out-there make-up as the A-list started experimenting in style. There were some fashion winners like Rosie Huntington-Whiteley who showed off her incredible curves in a vinyl dress and Jourdan Dunn who dazzled in a textured metallic frock by Hugo Boss. Even fellow model Suki Waterhouse took a moment to wow the paps in a goddess dress in shimmering silver.

Aside from the perfectly presented model pack there were other stars who looked all kinds of strange - like Emma Watson who wore a monochrome ensemble that showed off her tiny midriff but not to great effect. The cape like top and broad shoulders were unflattering while the high-waisted wide leg trousers gave her an odd silhouette.

Nonetheless it was Emma Watson who won the GQ Award for Woman of The Year, but we're not giving her any points for this new look! Another star who was wide of the mark was Rita Ora whose sequin dress by Etro failed to give her the wow factor impact we were hoping for. 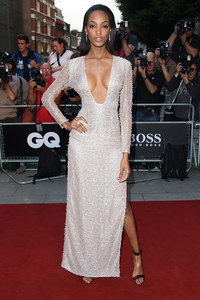 Jessie J kept things a bit too simple and safe, wearing an all black look with flashes of flesh - time to go a bit bolder we feel! And as for Pixie Lott, the star obviously spent a lot of time getting volume into that barnet - her beehive backcombing took all eyes off her dress and up to her hairdo. That's some impressive height right there.

Kudos goes to Alexa Chung for pulling off a body con metallic frock - no mean feat - and for doing what she does best - a textured lob and vampy red lip.

Yep, all in all it was a mixed bag for fashion at the GQ Awards. We're guessing no one will forget this Claudia Winkleman moment for a while. The presenter showed up to the awards with a serious make-up malfunction. Someone seriously needs to step away from the bronzer. ​

The saggy jumpsuit, the ultra-tanned nose and eyeliner mess? If this is what the grunge trend looks like in action then we want no part of it!

Who's outfit do you love most? Tweet us @sofeminineuk!