This Sunday the Video Music Awards went off big time but let's get the important stuff out the way first, who turned heads for all the right reasons and who left little to the imagination? Enter Selena Gomez, Taylor Swift, Miley Cyrus and Rita Ora with their feathers, PVC and sequins. Only at the VMAs would such a sentence make absolute sense. Let's sort the best dressed from the go home garb...

The MTV Video Music Awards kicked off on Sunday and in its wake it left a whole string of unforgettable entrances and onstage ensembles.

When it comes to the arrivals there's only one thing on everyone's mind, the fashion hits v should-have-stayed-at-home haute, and it was certainly a mixed bag of hits and misses.

The cream of the Hollywood crop graced the red carpet in their best frocks with Disney starlet Selena Gomez upping the glam factor with her navy Atelier Versace gown.

Rita Ora followed suit with a plunging Alexandre Vauthier neckline complete with sequins and feathers. She was all about the dazzle and shimmer.

Less could be said for Miley Cyrus on the other hand, who fell somewhat short of clothes and style as she arrived clad in statement separates and a gem waist belt.

But it was her stage outfit that left people reaching for the remote control. Starting as she meant to go on, Miley ditched her 60 percent covered look for an all-on-show stage change.

The cropped haired singer performed alongside Robin Thicke in a near-naked outfit as she squeezed herself into her twerking two-piece.

Butt-baring PVC hot pants and a matching beige bralet, could this be Miley Cyrus's most revealing number to date?

Check out our gallery of the best and worst dressed celebs 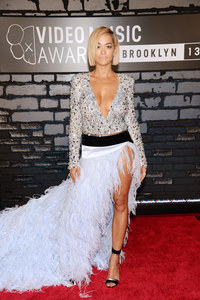 Who do you think was the best and worst dressed at the VMAs? Tweet us @sofeminineuk

Follow us on Instagram!
You might also like
Kylie Jenner's fashion highlights
by Amy Denman
Victoria Beckham's best looks: copy the style of the 'Posh Spice'
by Ayla Soguksu
Lady Diana VS Kate Middleton: the looks in comparison
by Ayla Soguksu
Iconic Oscar dresses from the year you were born
by Charlotte Hoddge
The most daring dresses worn at the Golden Globe Awards
by Charlotte Hoddge
Meghan Markles best fashion moments throughout the years
by Charlotte Hoddge
The Emmy Awards 2017: Our Round Up Of The Best Outfits
by Lareese Craig
Jennifer Lawrence Style: Her Best Outfits To Date
by Lareese Craig
Winnie Harlow: Model, Activist & All Round Babe
by Lareese Craig
No Knickers, No Problem: Celebrities Not Wearing Underwear
by Helen Turnbull