by Lareese Craig Published on 3 November 2014

It’s official. Cara Dele-amazing-vingne has landed her biggest gig yet as the solo face of Topshop’s Christmas campaign and we are struggling to stop this news from taking over our lives. There’s every chance she’s rocking out on sofas, air punching in boxing gloves and running riot but you'll have to wait for the full launch to see if there's any truth in that.... let the countdown begin!

Take the coolest high street store on the planet, add in the most in-demand model of generation X and you’ve got yourselves a winning crimbo campaign. I'm telling you John Lewis better up their game because The Bear & The Hare ain't seen nothing yet.

Topshop and Cara Delevingne are continuing to build their blossoming relationship as she's officially been named THE face of Topshop Christmas. Yep, solo face.

But if you were expecting precious snapshots of a girl twirling in her tinsel-tastic party frock and kissing boys under mistletoe then more fool you. Of course she’d sooner jump on sofas in boxing gloves and pull faces as she sings. Isn't that what we all wanna do after a few glasses of the mulled vino?

The full campaign launch is only three sleeps away but in the meantime feast your eyes on this glittery beaut...

Congrats Cara! May all your Christmases be truly stuffed with gorgeous Topshop garb #notevenslightlyenvious

Is the Cara Topshop Christmas campaign getting you in the festive spirit? Tweet us @sofeminineUK

Check out Cara in her latest Topshop campaigns 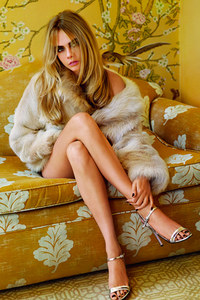 The Fashion Shows Everyone Should Give A Hoot About

13 Things All Girls Do When They're On A Payday High

Christmas gifts: unique presents for everyone

The Hottest Celebrity Glasses: 35 Frames You Need To Be Wearing

The Best Looks From The Grammys 2016 Red Carpet

H&M Gift Guide: All The Present Inspiration You Need For Your Nearest & Dearest