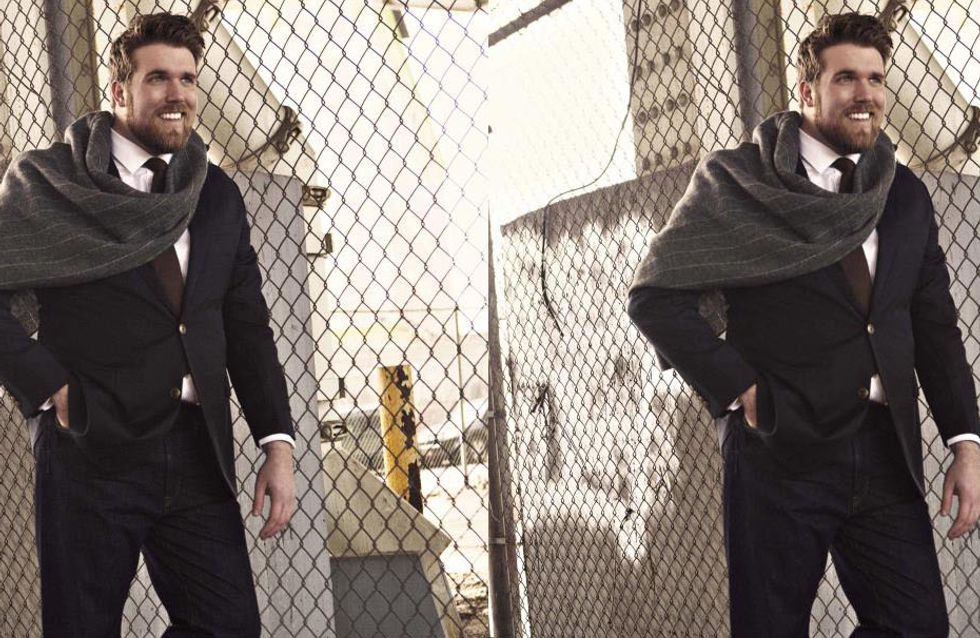 It's been a great year for plus-sized women. More and more plus-sized models are dominating the fashion world and, just yesterday a plus-sized model Nadia Aboulhosn was featured on the cover of Running Magazine. But who's representing the plus-sized guys out there? Zach Miko, that's who. This tall glass of water has just signed with Brawn, IMG's new plus-sized male division.

Yesterday, IMG announced that they had launched Brawn, a new division in their agency for plus-sized men. Along with this, they've announced the first plus-sized male model signed to their books, absolute hottie Zach Miko.

So who is this hot, tall enigma? Zach is a 6'6", 42-inch waisted model and actor whose thespian credits include Wolf of Wall Street and Limitless, and prior to being signed with IMG, he made his big break modelling for Target as the brand's first and only plus-sized male model in a nationwide campaign. Zach lives in New York, and has a degree from the American Academy of Dramatic Arts.

What a day. What a life. Thank you world for welcoming me into your lives. #bodypositivity #img #brawn #effyourbeautystandards Photo Credit @leonardocorredorphotography

Brawn, IMG's first plus-sized male model section has been added in conjunction with the company's highly successful plus-sized women division, Curve, which is currently home to modelling powerhouse Ashley Graham. Graham has had a crazy year after dominating headlines for leading the Lane Bryant #ImNoAngel campaign and earning herself the much coveted cover of Sports Illustrated magazine's swim suit issue.

Before landing his deal with IGM, Miko told Mashable that his size meant he struggling with his self esteem: "Growing up I never felt handsome or attractive. I always thought I needed to be something else, some other size, some other shape something other than who I was... I am proud of being a big guy, and I want to always be a big guy. And I think we all can finally see there is nothing wrong with that."

What a wonderful life this is! #img #wwd #brawn #bodypositivity #effyourbeautystandards #bigandtall

He also had some words of wisdom: "I spent my whole life feeling bad about my body. It doesn’t make you weak, it makes you human. One body is no better than any other body. It is all about how you feel about it. Be proud of who you are, because who you are is awesome."

What do you think of Zach Miko? Pretty hot right? Let us know! @sofeminineUK

Why Plus Size Model Precious Lee Is THE Girl To Watch Right Now!