Posing topless, baring side boob - there's no beauty boundaries when you're an A-lister with a licence to sell. Kristen Stewart is the latest celeb to ditch her garb and go bare for her new Balenciaga Florabotanica fragrance campaign and we're hedging our bets that it'll be leaving R-Patz pining for a reunion.

Stripping down to your birthday suit is no biggie for a perfume pro like Kristen Stewart, after all what's a perfume ad without a glimpse of side boob or a toned torso?

The Twilight beauty has posed topless for her latest Balenciaga Florabotanica campaign and we've gotta tell you clothes are so overrated.

Bringing sexy back, the 23-year-old actress smoulders in the black and white image, accompanied by a full colour Florabotanica bottle.

The creeping vine of colourful flowers encroaches on her back and across her delicate shoulders whilst K-Stew strikes a killer pose with a game face that could keep her in the running to being America's Next Top Model. 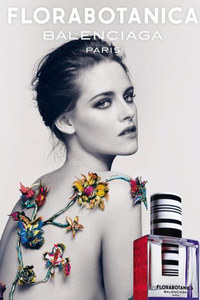 Her hair is seductively unkempt in a tousled updo with flyaways and loose tendrils spilling out from the nape of her neck.

Why K-Stew, you certainly know how to get our perfume pulse a-racing, no wonder she's the face of Balenciaga for a second year running.

Wide-eyed and gamine, this ad beats her first fully-clothed campaign which pictured her standing hands-in-pocket next to a life-size bottle of perfume.

Kristen's previously said she felt lucky to be a part of Florabotanica and added: "There is something natural about it. ​It’s very alive."

"I was never the one wearing my mum’s perfume and trying to be sexy. I was like hanging out with my brothers and doing the opposite of that."

Well the tomboy's definitely left town for her latest campaign! What do you think of her new perfume ad? Tweet us @sofeminineuk