David Beckham certainly knows what the people want. And what they want is to unapologetically stare at the buff former footballer in nothing but his pants. This is the 37-year-old’s latest promotional campaign for his immensely successful bodywear range for high street giant H&M.

As it’s for the autumn/winter 2013 collection, David’s swapped the sunny streets of L.A. for some dimly-lit public showers, which affords the footballing legend the opportunity to smoulder and stare off moodily into the distance under the dim lighting.

Despite retiring three months ago, David’s clearly still hitting the gym, showing off his exceptionally defined abs and toned legs in a variety of shots released today. 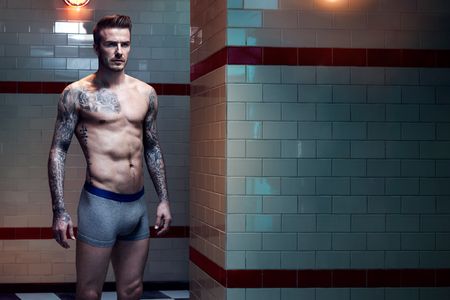 Due to the immense popularity of Beckham’s Bodywear (amongst men as well as women), H&M have extended the range to include clothing, which he’s also seen sporting in the campaign images.

Speaking of his latest collection, the father-of-four said: “I love the heritage athletic style of the new pieces in my Bodywear collection at H&M. “The vests, pajama pants and raglan sleeve tops are already like wardrobe favourites for me that I know I’ll wear all season long.

“It was great to shoot them in an old-fashioned East End changing room. It was like I had gone right back to my roots.”

​Although there’s no shamelessly close up shots of his pert bum – like we were previously treated to in the Guy Ritchie shot campaign ad for spring/summer – it’s safe to say his fans won’t be disappointed.

So for your perfect Wednesday morning pick-me-up (and who isn’t in need of one midweek?) check out the man in action in this behind-the-scenes video from the shoot.

Wedding Bouquets: The Perfect Flowers For Your Big Day

50 of the best wedding gift ideas ever