All eyes are on Kate Middleton and her bump right now and we’re all taking many a note of her flawless maternity style. But it seems there’s something else about Kate Britain have come to admire. Not only is she the most fashionable mum-to-be ever but she’s just been crowned Britain’s number one hair icon.

The Duchess of Cambridge is constantly taking the best dressed top spot and now she’s the pick of the bunch for her barnet too. Kate’s radiant bouncy tresses saw her beat British beauties Cheryl Cole and Holly Willoughby to first place in a recent survey by Kérastase.

The poll, which asked 2,000 women about their hair, revealed 70 per cent of women wanted more voluminous locks so it’s no wonder Miss Middleton raced straight to the top of the most desirable hair charts.

Kate Middleton’s hair is not only thick, healthy and shiny it’s also the perfect shade of brown with warm chestnut undertones.

The Kérastase survey also found that nearly half of the women questioned said their hair was the most important part of their appearance with some valuing their precious locks at over £1 million pounds. Ouch that's pricey.

They say your tresses improve during pregnancy so it looks like Kate might be holding onto her crowning glory spot for a few more months. 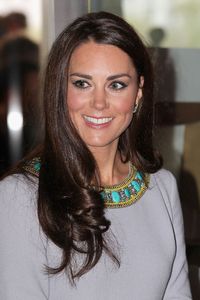