by Ursula Dewey Published on 3 March 2014 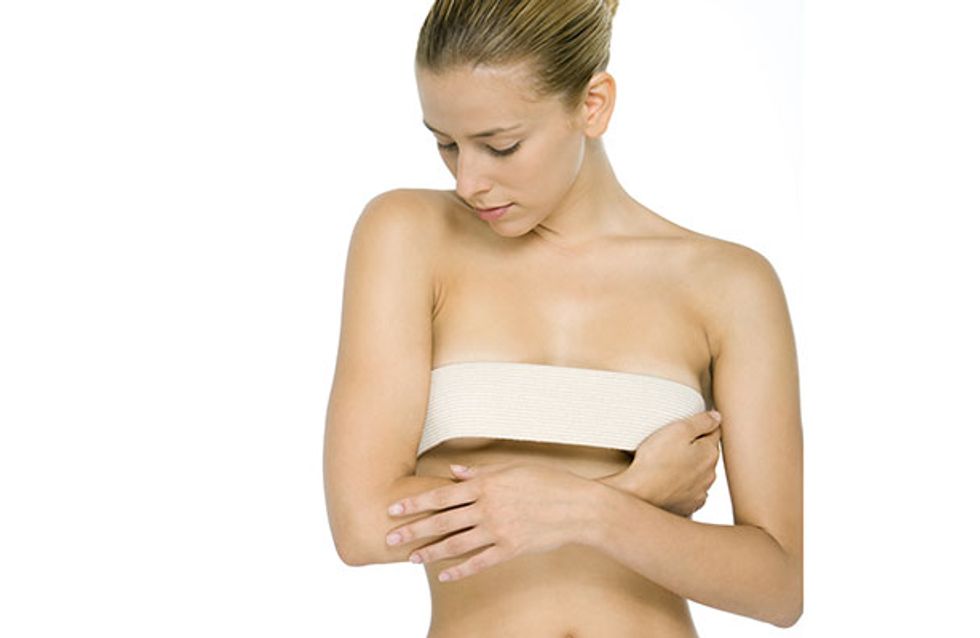 Pretty much every woman on the planet has one breast that is somewhat bigger than the other, but for some women the difference in size and shape can be extreme. If you're worried about uneven, asymmetrical breasts there are several ways to achieve a more even-looking cleavage. We spoke to Consultant Plastic Surgeon Patrick Mallucci to find out more.

Uneven breasts come in all shapes and sizes, but they all pose similar problems. Along with not being able to find bras that fit and clothes that don't draw attention to the asymmetry, having uneven breasts can often cause a crisis of confidence among many women.

If the difference in breast size is significant there are several surgical options that exist to correct the problem, from uplifts to breast reduction, implants and fat transfer treatments. To discover the variety of treatment options we spoke to Consultant Plastic Surgeon Patrick Mallucci from MyBreast.

How many women suffer from uneven breasts?

"It’s an interesting question really because we would say that every single woman has got uneven breasts. The question is here, when is it a problem and when do you need to do something about it.

"It’s important to say that unevenness is normal to a certain extent and that it is much more common than people think. A lot of girls with uneven breasts think that they are the only ones or a rarity but actually they’re not.

What are the symptoms of breast asymmetry?

While you might think that uneven breasts simply means you've got a big one and a smaller one, there are often a lot of other factors at play. Having asymmetric breasts can involve one or several of the following symptoms: uneven breast size, different nipple size or shape, uneven nipple position and different breast shapes.

But when does having slightly different looking boobs become a problem that you might want to seek surgery for?

Because there are many different permutations of what uneven breasts can consist of there are also lots of different ways to correct them as well. It's important to remember that every type of correction surgery for asymmetric breasts is tailored to your individual needs, and while one person may require implants, another patient might end up having a reduction.

For the most part corrective options involve either one (or a combination of) the following:

Patrick says the most important principle to remember when it comes to breast correction surgery is to make the breasts as similar as possible. He says: "To make two identical breasts is perhaps unrealistic. To correct asymmetry you have to try and make them as similar as possible. So depending on the situation it might mean making the smaller one bigger, the bigger one smaller, and it might mean correcting or not correcting things like nipple position and size etc."

While that might not be what every girl hopes to hear, Patrick says it's really important to listen to the advice the surgeon gives to you. With uneven breasts it is not all about chasing size. It’s about chasing a better shape better symmetry.

What about the other breast?

While you might love and adore one of your breasts, more often than not, if you are trying to make your breasts more even, you will not only have to change one side, but will usually require surgery on the other side too.

Patrick explains that this is "because you’re trying to make two breasts behave in a similar manner to each other, for example if you’re putting an implant in one side you might have to put an implant in the other side and reduce around it so that you don’t have one with an implant and one without."

The idea is to have two breasts which look as similar as possible, so if you're having a consultation don't be surprised if you have to have operations on both breasts.

What are the risk factors?

Depending on the procedure you have to correct uneven breasts you will have different associated risk factors. You should discuss these in depth with your consultant.

Most often, breast surgery involves risks such as "scarring, potential consequences for things like sensitivity of the nipples, possible interference with breast feeding in the future and sometimes a risk to the nipple itself in terms of its blood supply."

The sad truth is, that if you want to increase or reduce the size of one of your breasts it won't happen on its own. Patrick suggests forgetting about potions, tablets and lotions as they're probably not going to give you the visible result you want.

However, one treatment option that can give a more natural result is a fat transfer augmentation.

"One thing that I think is incredibly useful in cases of breast asymmetry and has an increasingly important role is fat transfer. In other words, instead of putting an implant in the smaller breast, if you augment that using fat you’re keeping the breast natural and you’re still sticking to the principals of keeping the breasts as similar as possible."

If you're not keen on the idea of implants or having the larger breast reduced, talk to your consultant about the option of fat transfer too. Normally with a fat transfer procedure, you don't have to interfere with the other breast either.

Recovery time depends on the surgery procedure that has been done. If you’ve got an implant, the standard implant recovery is six weeks. And the same goes for most breast uplift or reduction procedures.

The all important results of your procedure can vary but you should be able to get a good result in terms of similar volume.

Patrick says: "Everybody should be aware or warned that there is a possibility that they may require a second procedure to fine tune or adjust what has been done. I think that’s really important to remember. It might not be correctable all in one go. The second procedure would be a tweaking of what’s gone on before. Does the nipple need to be raised a bit more? Was that implant big enough? Do we need a bit more fat transferred? Can we readjust this scar? With a second operation it’s about fine-tuning and re-tailoring."

What questions should you ask if you are considering surgery for uneven breasts?

If you're considering breast surgery to correct uneven breasts, Patrick has this advice:

- Make sure you are 100 per cent sure you want to have a procedure​
- Make sure you are going to someone who has a specific interest in corrective breast surgery. Check out their background and experience and see what they have done. Ask to see their work.
- Listen to the advice of your surgeon.

Got a question about asymmetric breasts? Had surgery yourself? Tweet us @sofeminineUK