From Full-Body Tights to Anna Wintour the Babysitter: The Most Amazing Things We Saw At NYFW

by Cliche Wynter Published on 17 February 2015

The fashion shows in New York are winding down, and while we hate to see it go, we love reminiscing on the week's memorable moments. So without further ado, here are some of the most incredible things we saw at NYFW!

Could you have ever imagined a world where Victoria Beckham and Kanye West got Anna Wintour to play babysitter from frow? Or how about tights being stretched beyond the legs to cover the entire body? Those were only a few of the sightings we came across at the Autumn/Winter 2015 shows. As you can imagine, there was hardly a dull moment.

Check out some more memorable sightings right this way.

Tights? No longer JUST for legs

Well, here's a first. Did you know that pantyhose could be worn as a full ensemble? Kim K knew (or at least her self-proclaimed "genius" hubby Kanye West did). The reality star was the first to sport this look from the Yeezy for Adidas collection.

Stylists at Hood by Air revived an old classic: tights over the face. Oh you know, like robber chic.

Anna Wintour and the frow children

At the Victoria Beckham show it was impossible to miss her entire stylish family sitting front row. But what was even more interesting was spotting Anna Wintour right next to them.

Seriously, is your womb on fire yet?

Naomi Campbell rightfully closed the Zac Posen show in a gown fit for the Queen that she is.

Thom Browne, one of the most innovative American designers, made his genius known once again. His A/W 2015 collection was rife with totally black looks complete with veils. The models looked like elegant, young widows.

Punk and Kawaii at the same time

Nicopanda, the collection by Nicola Formichetti, seems to fuse punk and Kawaii, the latter being "cuteness in the context of Japanese culture." Here Formichetti delves even deeper into his examination Harajaku style.

It's ALL about the shoes! 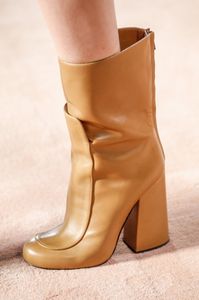 If you're looking for a good feel of NYFW look no further than these statement-making shoes!

One of our fave parts of Fashion Week was seeing the utter diversity on the runway. It wasn't all super thin models. Below we saw the likes of Winnie Harlow, a model who has vitiligo, strut her stuff at Desigual. We were also pleased to see "Orange is the New Black" star Laverne Cox make her way down the catwalk, along with models with disabilities who marched for FTL Moda.

Was this all a ploy to draw attention and garner press for their show? Perhaps. But either way, we're thoroughly on board with this season's theme: diversity.

What's been your fave part of NYFW? Tweet us @sofeminineUK!

11 Types Of People You See At Fashion Week