From Purple Crew Necks To Oversized Everything: We Give You The 23 Year Old's Style File

It's hard to remember a world without Justin Bieber, isn't it? You can't swish a fringe without bumping into another scandal he's managed to embroil himself in. And he's been trying really hard recently! Last night he and ex Selena Gomez sent Instagram into meltdown when they began bickering in Justin's comments. Long story short, him and Insta are no more. ​So what are we going to do now? Where will be get our JB fix? Well, our Biebs style file has come along at just the right time, it seems...

For those who don't know, Justin was brought into this world in 2009 by Usher Raymond, but you might know him better as 'Usher'. ​(And by the world I'm referring to the world of showbiz - not the actual world, that was all Patti Malette's doing.) He was just a little squirt with a swishy fringe and an affinity for the colour purple. But as Justin grew, his hair got shorter, his music better and his criminal record longer. He's been through many style transformations, eventually dropping the purple from his repertoire, but always keeping his fashion tastes firmly rooted in hip hop. His latest tour merch reflects his most recent style modification, taking an edgier route and mixing it up with a number of influences taken from the rock gods: JB was recently criticised for wearing a Nirvana t-shirt, and upsetting Marilyn Manson fans by wearing - and selling - a tee emblazoned with the heavy metal singer.

There have been many a dodgy outfit sported by Justin and even now, as he continues to evolve, some of his ensembles could easily be called into question. Justin will never not be into trucker hats and vests that go down to his knees and jeans that aren't really jeans just hundreds of tiny rips and all that damn pleather and we will just have to accept him for that. We'll make a deal with you, J-Dog: you keep making hits like Sorry, and we'll let you keep the dress vests, mmkay? 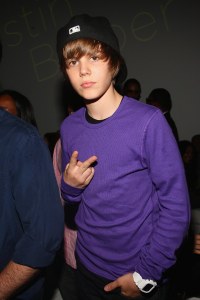 What do you think of Justin's every-changing fashion? Let us know! @sofeminineUK

​Kylie Jenner Style: The Outfits We Need To Have In Our Lives​​