The Victoria Secret Fashion Show 2015 happened last night and we might or might not have scrolled through the models Instagram pages while we stuffing our faces with Doritos. It was a case of, if you can’t join them, don’t bother. The girls looked amazing and it’s fair to say that Kendal Jenner and BFF Gigi Handid stole the show.

With a host of beautiful models (sorry angels) , Ellie Goulding, Selena Gomez and The Weeknd performing, the 2015 Victoria Secret show was going to be something special.

The girls were as hot as ever, and even the new kids on the block, Kendall, Gigi and Leomie Anderson, the only British model, walked the catwalk with sheer perfection. Nope we are not jealous at all.

The show celebrated its 20th birthday, and it did so with such style. The models were laced with stunning lingerie, and elaborate outfits. We need Kendall's cape NOW. The girls looked beautiful and happy walking down that catwalk. I guess you would have a smile on your face if you looked that good in underwear.

The show doesn’t air on telly till the 8th of December, so while you wait on that here are some images from the show. 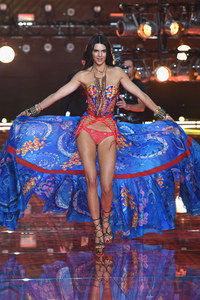 What do you think of the show? Tweet us @sofeminineUK

Tolani Shoneye
…
For all the best videos, memes and shareable news!