MTV VMAs 2016: The Most Outrageous Outfits

Can you believe it's already that time of year again? Yep, like every year before it, the VMAs 2016 was quite the party. But forget about celebrities' musical achievements, we're here to look at their sartorial score. And by the looks of it, the order of the night was as outrageous as poss - walk this way for all sheer errrrythang...

So that's another Video Music Awards ceremony done and dusted. This year we didn't have any Miley Cyrus twerking or Nicki Minaj related beef but what we did have was Beyonce doing what she does best - slayyyyying, Drake and Rihanna kinda, nearly made it official, and Alicia Keys showed us all her amazing natural beauty by rocking the red carpet completely bare faced. It's an understatement to say we totally heart her for it. Oh, and Britney Spears quite possibly put on the comeback performance of her career.

As for the outfit game, well it appears the unwritten dress code for this year was daring and adventurous AF. We're talking sheer fabrics, a lot of sequins and more skin than fabric. I mean, let's just take a moment to talk about Queen Bey's array of glitzy numbers, including an extravagant feathered gown which matched with her adorable mini me Blue Ivy. Blue scored extra style points for her babin braids too - that girl's gonna go far!

Heres our pick of the most out-there get up from the night: 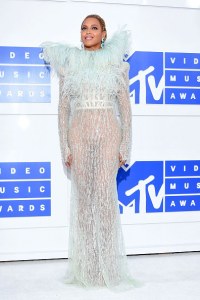 The Best Dressed From The Billboard Music Awards 2016