When celebrities go from long to short it's always a big deal but Jennifer Lawrence's new pixie cut is practically THE hair news of the year. Following Anne Hathaway's lead she's ditched her honey blonde lengths for a cool behind the ear crop. Was this another Hunger Games sacrifice? Or did she just fancy a change?

Jennifer Lawrence is famed for dying her honey locks chocolate brown for her role as Katniss Everdeen in The Hunger Games franchise but has she taken the director's yells to 'cut' a little too literally this time?

The gorgeous actress is the latest celeb to swap her long tresses for a funky pixie crop. Rather her than us, it takes some guts to take your ponytail home in a bag!

J-Law debuted her new choppy 'do on Facebook and on a live Google+ Hangout Q&A which was streamed on Google.

The 25-year-old showed off her edgy pixie crop on The Hunger Games: Catching Fire promo tour on Wednesday 6th November and she seems to be loving it.

So what inspired her to brave the chop? Well, for once it had zilch to do with her Hunger Games role, even though she said she did it just to annoy Hunger Games Director Francis Lawrence (no relation of Jennifer's FYI).

She joked: "I just did it to make Francis mad. I did it just to annoy him. He totally thought it was me giving him the finger." 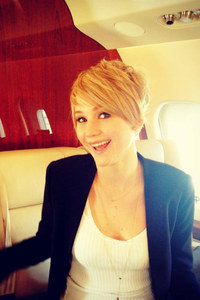 The real reason behind her image overhaul? It simply comes down to getting her hair back in good condition - not that it ever looked a strand less than perfect.

She added: "It's just fried from being dyed so much."

That's one way to promote your new film! Anyone else think she makes for an uncanny Dido look-a-likey now?

Jennifer can pull off anything - she even made her Oscars stair trip graceful! But man we do miss her long locks! 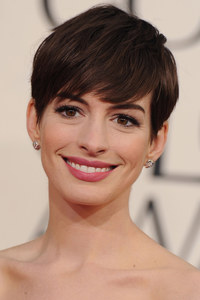 What do you think of J-Law's pixie crop? Tweet us @sofeminineuk

Lareese Craig
…
267 shares
For all the best videos, memes and shareable news!