by Lareese Craig Published on 23 August 2013 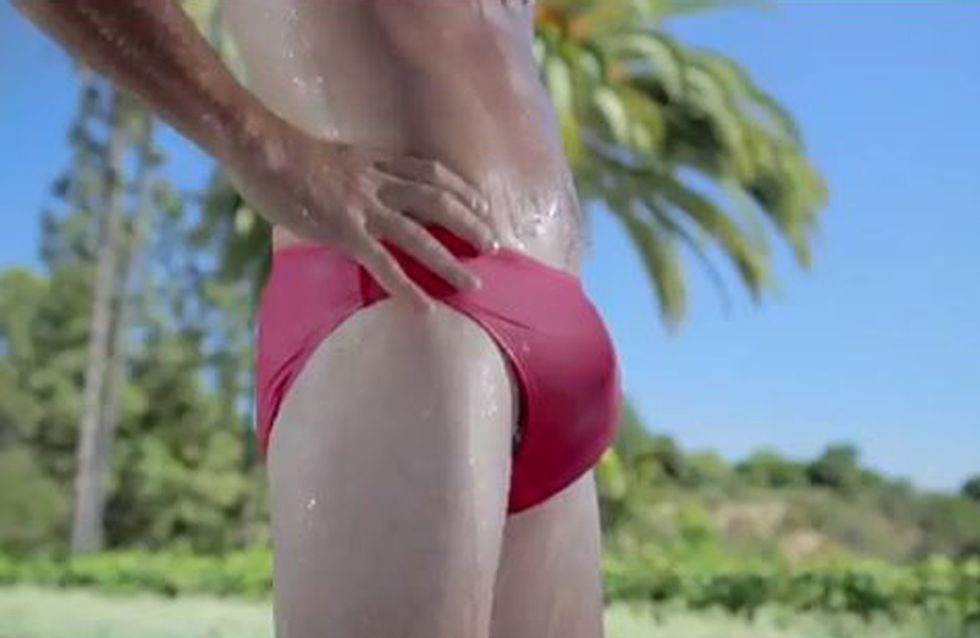 Benefit Cosmetics is the beauty brand with a sense of humour and a tongue in cheek attitude but now they've gone and topped their personal best for wit and whimsy with a new penis-heavy advert. Yes, you read that right. The new campaign for their best selling mascara, They're Real, features close up shots of well-endowed men...or so they seem.

They've given their best selling 'They're Real' mascara a sexy new selling point with a cheeky new campaign.

Featuring a hot surfer hunk and a yoga bunny beaut (with a cameo appearance from Jersey Shore's Vinny Guadagnino) this beauty ad is definitely one for the watershed.

With close-up crotch shots and bulging Speedos, it's probably wise to watch with a cooling cocktail in hand (pun intended).

A pack of swooning girls stare opened mouthed as they fan themselves with magazines and peep over their sunnies to catch a glimpse of the guys and their enormous nether regions.

Then Benefit goes where no beauty brand has gone before when the next thing you see is the men thrusting a hand down their pants for what appears to be a very public fondle - but fear not - the only phallus we see is the Benefit They're Real mascara.

They're Real is supposed to give your peepers a false lash effect finish prompting everyone to ask "Are they real?"
And while we're already super fans of this make-up bag must we never knew its beauty benefits were just as appealing to men. So whether you want to pad out your package or plump up your lashes - They're Real is ready to help.

It's not everyday you see men's private parts and mascara in the same ad but Benefit Cosmetics obviously saw a gap in the market. Who said make-up had to be serious anyway?

We love Benefit's fun-loving approach to cosmetics but can't help but think mascara/masturbation is a step too far!

What's the verdict? Cringe-worthy or beauty banter at its best?

Anyone else got an eye make-up erection? Tweet us your thoughts @sofeminineuk

by Lareese Craig
#Beauty
For all the best videos, memes and shareable news!