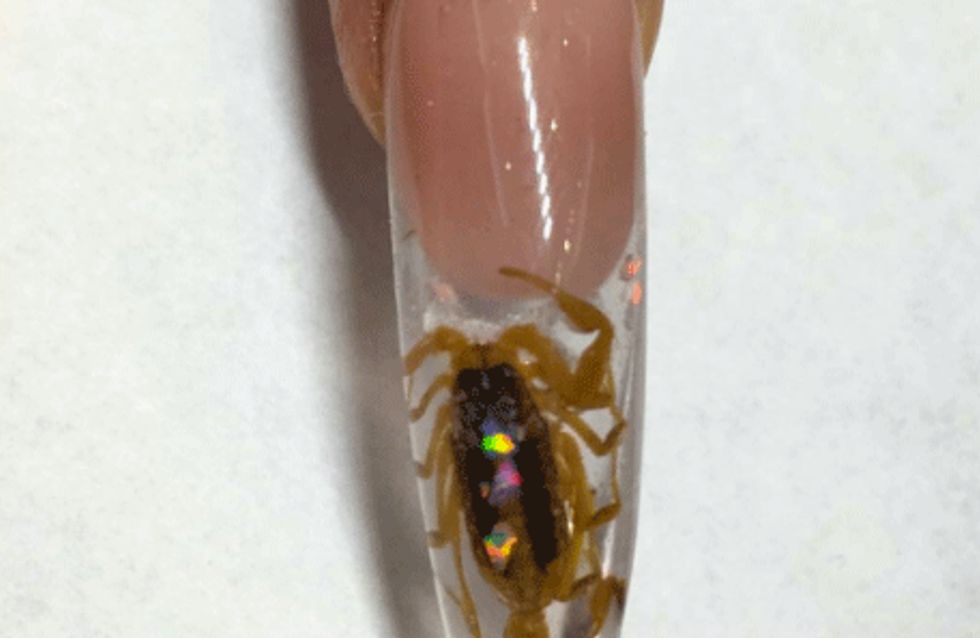 We enjoy 3D nail art as much as the next beauty fan (embellished jewels to make Vanesa Hudgens weep? Yes please!) but what about using real-life insects to achieve your look like once-living scorpions? That's right folks, scorpion nails are here and they're sweeping the beauty world but would you ever be brave enough to try this freaky look? This ain't one for the faint hearted - if you're creepy-crawly phobic look away now...

Wth all the freakishly weird and wonderful beauty trends out there, you'd think we would've become immune to being shocked by crazy new ones but this one is so bonkers it puts botanical and pierced nails to shame. Prepare to meet scorpion nails, the bizarre manicure sweeping Latin America that's equal parts scary and intriguing.

If you're a fan of 3D nail art, send this straight to the top of your bucket list. Bringing manicures to life, the women of Mexico are at the forefront of this bizarre craze, which involves gluing dead scorpions - who have a venom so deadly it kills victims in 15 minutes flat - to your nails, all in the name of a Insta-worthy mani. We don't know how to feel either.

In order to be teeny enough to fit onto the nails, baby scorpions are used for the treatment rather than fully grown ones. The trend began when Lupita Garcia, a scorpion enthusiast, suggested the idea of introducing a scorpion-themed manicure to the price list at Rocío’s Nail Parlour in Durango, Mexico. The tiny dead scorpions are stuck onto women’s nails, but despite being less than a week old, are still highly venomous. Eek!

Speaking to Mail Online, Lupita explained: ‘Most people think scorpions are to be feared, but I think they are animals of real beauty. I’m always innovating new ways to make art out of scorpions, and this manicure has been my biggest hit.'

If you're worried about any sting post-application, fear not as the insects are killed with bug spray before they go anywhere near the manicurist’s table. But what does worry us slightly is that the stingers are left on, though brave salon owner Rocío says she never touches the animals with her hands. Rather her than us. The trend is sweeping Instagram too, with other brave beauty fans also giving it a go.

We're all for pushing the beauty boundaries, but on this occasion nude polish does the job *gulp*.

What do you think of scorpion nails? Let us know @soFeminineUK!

by Rose Adams
55 shares
From hair ideas to outifts, look no further for your daily inspiration