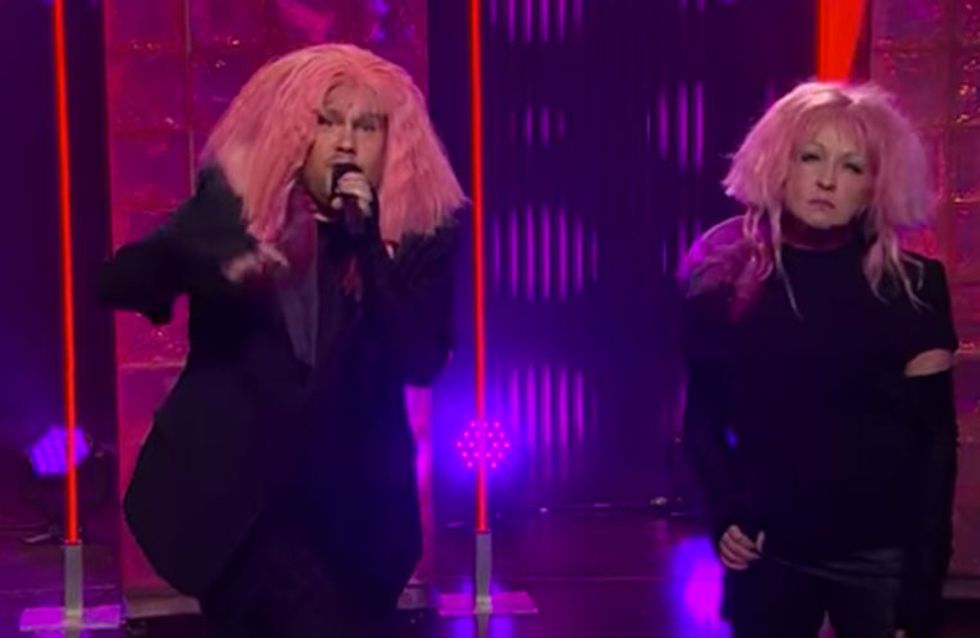 Our fave funnyman James Corden is at it again with the impersonations, but this time he's taking one for the girls' team and speaking up for equality. Funny and a feminist? We love him all the more for it...

We've only just got over his LOL for days parody of Beyonce's Lemonade (where we did, in fact, lol for days) and now James Corden is back with another bang(er). This time he's taken on Cyndi Lauper's classic 'Girl's Just Wanna Have Fun', but with his own feminist spin. Yep, you heard right.

Teaming up with the 'True Colours' singer herself, and sporting fetching, matching pink hairdos, the pair united on James' talk show The Late Late Show to belt out our fave karaoke tune. But the stars aren't singing the version we all know and love, they are in fact belting out a totally new rendition of the classic, this time titled: 'Girls just want equal funds' critiquing the pay gap in the film industry, which Jennifer Lawrence has publicly spoken out about before. Hear, hear!

For those of you not familiar with Cyndi, she's pretty cray, and has never been one to play by the rules, so it's no surprise that she's mocking this ridiculous flaw in the industry. She's obvs been giving James style tips too because not only are they rocking the same barnets, but the same eighties outfits too - complete with throwback fingerless gloves. This is a look we totally dig.

It's refreshing to see James is on board with speaking up against the inequality which is apparently rife in Hollywood, so kudos to him for bringing this issue to light - in his own, unique way of course. We would expect nothing less!

What do you think of James and Cyndi's version? Let us know: @SofeminineUK!