Ever since Cheryl Cole flashed THAT rose tattoo on the Girls Aloud tour back in February reactions have been coming thick and fast, but now her tattoo artist has shared a cheeky full-extent photo of her budding ink work and it's shocking to say the least. She's putting a whole new spin on the classic English rose...

It's safe to say Cheryl Cole's got the bug for tattoos, having already got a fair few on her bod including her neck, hand and thigh.

But now Cheryl's tattoo artist, Nikko Hurtado, has shared the full-extent photo of the singer's back tat - with a tattoo that shows Cheryl's pert derriere covered in a huge rose design.

The LA ink artist posted the candid snap on his Instagram with the caption: "Here is a in progress shot of a Tattoo I've been covering up and reworking."

He later added: "Really exited to show healed shots. It was some intense tattooing sessions. She's tough as nails." Anyone that endures 15 hours of needle work is super human in our books. 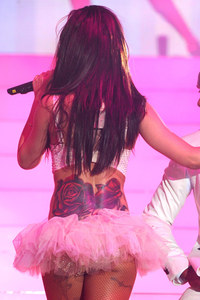 Wearing a raunchy pink lace thong the body art can be seen in all it's glory, stretching from her lower back to the top of her thighs. Ouch.

After a vocal reaction on her Twitter Cheryl told one fan she'd had the tattoo for seven to eight months but has only just had it detailed.

Her latest addition has sparked a stormy reception from her twitter followers but Cheryl hit back at the haters posting: "People are entitled to their own opinion. Personally I’ve never really concerned myself with other people’s body parts!”

She later tweeted: "The easiest thing to be in the world is you, the most difficult thing to be is what other people want you to be."

At the National Television Awards in January 2011 she stepped out in a revealing LBD with her a blossoming outline on her lower back, allegedly to cover a black butterfly.

She first flashed the growing ink whilst on tour with Girls Aloud in February but the concert-goers still weren't aware of just how cheeky this new rose tat was.

When Cheryl first unveiled her new inking, she said: “It was really painful but I think I’m done with tattoos now. It wasn’t for any particular reason. I just liked the design. It took 15 hours in total.”

Wow, 15 hours in the tattoo shop, that really is a case of bottoms up!

Do you think Cheryl's new tattoo is all rosy or a step too far? Tweet us @sofeminineuk

Lareese Craig
…
#Tattoo
From hair ideas to outifts, look no further for your daily inspiration