Hot Or Not? Rainbow Beards Are Here And We're Not Sure How To Feel

The only thing better than a fully committed natural beard? A neon blue fully committed beard, that's what. Men everywhere are claiming the rainbow hair trend for themselves by dying their facial furniture all kinds of crazy colours. But is it HOT or would we rather they just kept to their mousy brown roots?

Beards have been a hairy talking point over the last year. Are they overrated and scruffy or sexy as hell? (Answer: sexy as hell, obviously.)

​What hadn't previously been discussed is whether they they should ever be dyed varying colours of the rainbow...and probably for good reason.

However, it's happened anyway and to be fair these colourful faced fellows offer up a pretty solid case for pro beard discourse, but what do you think? Bright vs. Brown - the battle of the balbo is ON.

Bespoke beard made to measure.

May the wealthy aristocrat live on in his merman form.

When you like blue and purple equal amounts. The struggle is real.

He's not fully committed to his beard game yet. He's still finding himself.

It's like those fields of golden barley just landed on his face. In LOVE.

Face furniture of our dreams right there.

I mean he must be some sort of relation to Ariel.

Birdlike and beautiful with it

He makes us want to drown just so he could wade in and get his beard wet. God amongst men.

Long live the beard we say! 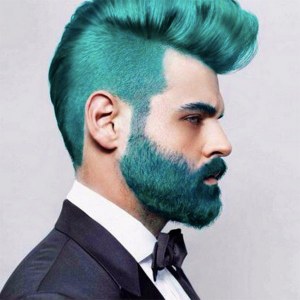 12 Things Men With Beards Are Sick Of Hearing