by Vivian KELLY Published on 8 September 2014 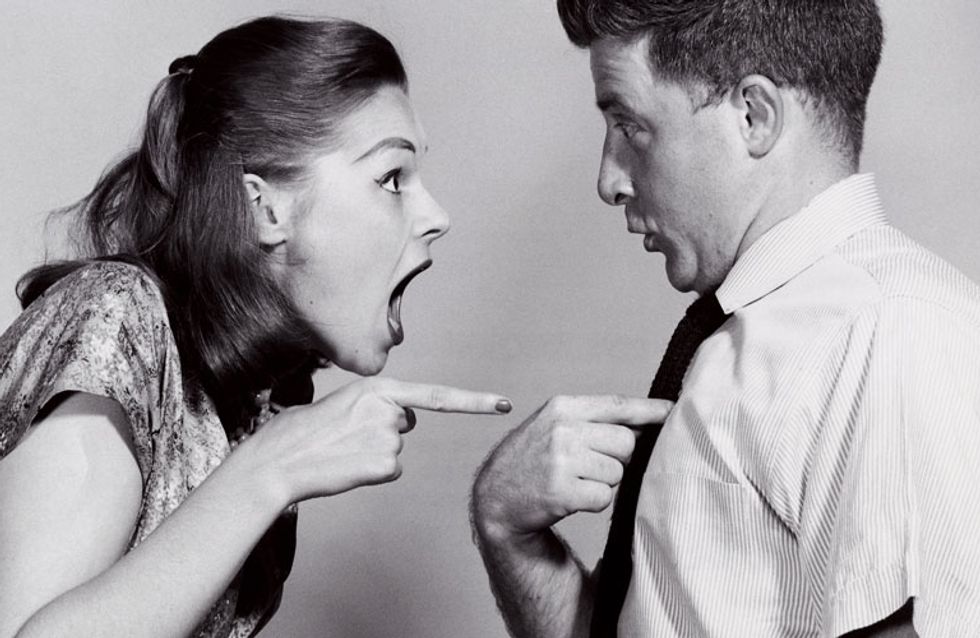 Does your man leave the milk outside the fridge like everyday single day? Does he ever pick up his socks? Does he keep you waiting? It’s fair to say that us girls put up with a lot, no? Well. We’re DONE. Think of all the BS that we have to deal with on a day to day basis...no wonder we’re on a short fuse. Often enough it’s men we have to blame. Here are 17 things guys do that drive women craAzy…

And before you say ‘it goes both ways’ lets just address that this article is for women, aimed at women (exasperated ones). Of course it goes both ways in every relationship, but right here, right now we are RANTING. Because after all, we’re all a little bit cray cray anyway, right Dana? Well, here it goes…

How silly does it feel to strategically check your phone throughout the day to find a text from your man (that you never get sent)? Very.

When boys think they’ve got your love locked down, sometimes their behaviour begins to change. And this is a prime example ladies. Apparently he doesn’t have the time of day for you anymore. He’s 'busy' yet he’s been running on the same routine for the last six months. It takes seconds to text someone back, is this so unreasonable to ask? Nope.

2. He can't be bothered to call

Guys have a strange relationship with phones. The only form of communication they know is face to face, apart from that, virtual communication means nada to them.

Yet we gladly put up with their childish obsession with video games, their loud grunting and groaning during the highlights and their laddish mates. So how about meet our needs for once - pick up the goddam phone!

What's wrong with the male species nowadays? If we try to talk about our day and get worked up, we’re 'whinging', if we cry during a film, we're 'wussies', if we cry over a relationship, we’re 'crazy'! WHAT DO YOU WANT FROM US?

Oh gawd. Really? We're not that stupid. Go self-reflect or something and stop wasting our time. Us girls should not be dealing with this. (We're not shrinks.)

If he really likes you, he will be ready. End of.

5. Breaking up with us and expecting us to come running back

There's A LOT of us who fall victim to this one. Time and time again we fall for their BS stories. 'I'm so sorry', 'letting you go was my biggest regret of my life', 'I won't stop until I get you back'.

So now you wanna play baby? Now you wanna talk emotions? A man never makes the same mistake twice and his next GF will thank you. Lesson learnt.

6. Leaving the toilet seat up

We get it - most of you were potty trained that way. But for us girls, it's totally different. We NEED the toilet seat down.

​No girl wants to fall in the toilet! Either work on your aim or stop being lazy and put the seat down once and a while. We promise, we’ll treat you if you do.

Boys, ever wonder where our nagging stems from? From taking the bins out to our yearly anniversaries sometimes we really do question whether men have a brain the size of a fish.

And we're not sure whether it's because he's never listening or because guys are just programmed in different ways but HELL does it piss us off. Saying that...

How many times have you heard women accused of being 'money grabbing-whores'? Men think all we want is money and material things and while that's always a bonus our real desire actually lays in their actions.

​You could be the poorest man we've ever known but if you know how to show us love (i.e. hold our hand, open the door for us, kiss us randomly, tell us you care) we'll love you more than you'll ever know.

9. Not giving a damn

But no matter how many times you've sat your man down or cried down the phone or tried to play the whole 'I'll ignore him for a few days and he can see how it feels' game, sometimes men are selfish and sometimes they do take us for granted.

EVERYWHERE. As much as we love men with beards there's nothing worse than a bunch of pubic-face hairs sprinkled round the sink. Seriously, we're done cleaning up. Keep it up and we'll take away sexual privileges.

Like we said Put. The. Damn. Milk. Away. They hate on us for acting like their mum but when they're spoiling things because of carlessness what do they expect us to do - buy more groceries?

​We'll barter and threat if we have to. Do it or you're not getting breakfast!

The amount of times you make plans with your man and he doesn't pull through. Uncountable.

​Things like 'Oh, I forgot', 'I'm not feeling well' or just flat out ignoring you. Sound familiar? The circus doesn't end there. A few days later they'll come back and try again - when it suits them of course. If convenience is what they're after go elsewhere. Not on.

13. Leaving things on the floor

Socks, pants, trousers, T-shirts - you'll find a whole trail of them in any man's house. Why is it so hard to pick things up and fold them away? It's shocking laziness and it's a major turn off. Pick up the damn socks already!

It's true that women check out other men too (even though your BF probably thinks you're a saint). But you know why your man never gives you a grilling for it? Because there's a way of doing it. There's a way of appreciating beauty without offending or hurting the one you love. Straight up.

If your guy is blatantly checking out another girl in front of you he’s prioritising his needs. It’s downright disrespectful, but do women still put up with it? Yes.

Some guys go around acting like creeps on Instagram, Twitter and Facebook but they seem to forget that those platforms show us (and everyone else) their recent activity. (Even when we're not trying to stalk you.)

It's sneaky, snidy and totally uncalled for. Unless your man wants you to become a psychob*tch girlfriend or worse, lose respect for him, then he shouldn't be doing it. Period.

Men do things that are highly inappropriate (i.e. flirting with other chicks, drooling over other women) but then think they can choose how short our dresses are? Don't even.

18. Groping us when we're not in the mood

Guys have no problem being touchy feely when they want something, but when it comes to all the above it's clearly too hard. Don't be surprised if we start withholding sex from you - it's a TWO WAY street, remember?

What does your man do that drives you crazy? Tweet us @sofeminineUK!

Don't Take Sh*t From Him! Things Women Should Never Put Up With In A Relationship