There’s just no escaping the pressure to look good, is there? With Angelina Jolie's peachy pout, Kate Middleton’s tumbling tresses and Posh’s pins, there's a flawless woman round every corner - whether it be in a glossy mag, in the street or in your own living room (we’ve all got THAT friend). So, just how influenced are we by appearances in an age that claims to welcome real women, with real imperfections? We decided to find out...

In a bumper beauty survey of more than 5,000 women, we questioned females across Europe on their body confidence, beauty hang-ups and celebrity crushes.

While some of the results were predictable, we were shocked to learn you lot don't rate Cara Delevingne's face but you do pine after her figure.

Europe, however, decided that Angelina Jolie and her perfect pout were worthy of a win, with Germany, Spain and Italy naming her the most beautiful A-lister.

Controversially, model of the moment Cara Delevingne was ranked the least beautiful, with only 8% of the overall vote.

This meant she was beaten by the likes of Beyoncé, Megan Fox and Victoria Beckham. Perhaps the power brow is an acquired taste after all.

And Miss Delevingne wasn't the only Brit model scraping the barrel for beauty points - Alexa Chung also received a low result, with only 10% of the overall vote. It seems our home-grown catwalk stars just aren't cutting it.

So just how much are we influenced by famous faces? If the following stats are anything to go by, we don’t bat an eyelid at skinny girls on billboards and celebrity cover shots - or at least we like to think we don’t.

Our results revealed that 34% of us aren't fazed by images of women in adverts or in magazines, yet weight is still the common cause for making us feel ugly.

When it comes to our own appearance, voters across the board said looking their best - rather than laughing with friends or spending time with family - was the key to confidence.

This begs the question, does confidence really come from within?

Whether we claim to be influenced by beauty-baring billboards or not, we’re still subjected to unachievable images from both the media and everyday real-life experiences.

With botox on the rise and women as young as 20 taking to surgery to stay young (TOWIE girls we're talking to you), the pressure to look flawless 24/7 is higher than ever.

No less than 77% of UK females said they thought women were under increasing pressure to maintain their looks with age thanks to Botox and other cosmetic surgery.

But 39% of us still think the before image is usually better than the post-surgery result. So while we mostly want to look younger for longer it seems no one likes a pillow face.

And it seems the pressure to look good and stay young is worst in the UK.

While a third of us Brits believe we lose our looks before we're 50, women in Spain and Italy reckon we've got until we're 60 plus before we need to worry. Come the big 50 we'll be emigrating to Spain, then!

Only 16% of us across Europe are completely satisfied with our appearance, while a whopping 26% of us are unhappy with the way we look - we really are our own worst critics.

So let’s talk body shapes: the Kelly Brook hourglass still comes up trumps with 60% of voters across all countries arguing it’s the most desirable figure.

This number was even higher if you single out the UK, with 70% of us Brits desiring Ms Brook's hourglass curves.

Interestingly, though, 'skinny’ and ‘boyish’ figures were in the top results as well, so maybe the Caras and Alexas are shaping our self-esteem after all.

What do you think of our beauty survey results? Think Cara was robbed of the most beautiful celeb victory? Or is Miranda Kerr a worthy winner? Tweet us your thoughts @sofeminineuk

Check out our galley of the most beautiful celebrities: 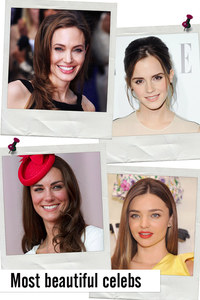