Growing Old Gracefully! Our Favourite Supermodels: Then and Now

by Pascale Day Published on 22 September 2016 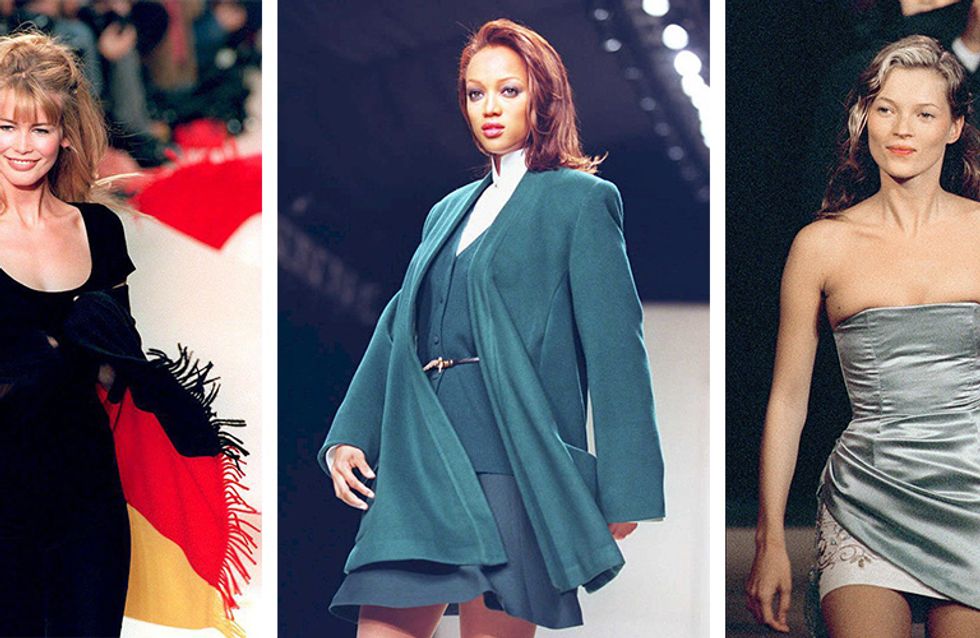 We'll admit it, when we look through these old photos of our fave models - the new kids on the block and the old-timers - we can't help but feel just a little bit jealous. I mean, no matter how many years have passed between their first and last photos, it's undeniable that they look just as fresh-faced right now as they did when they rocked up to their shoot debut - so much so we genuinely believe some of these ladies might be vampires (we're looking at you Iman). Take a look at our fa

Although Gigi only made her New York Fashion Week debut two years ago, that's all the time she needed to become the model of the moment. Having said that, at 21 she's already somewhat of a fashion veteran - she started modelling at the tender age of two after Paul Marciano of Guess discovered her, but paused to prioritise her school studies. Since then, she's taken the fashion industry by storm, fronting high-fashion campaigns here, there and everywhere and gracing the cover of every self-respecting fashion magazine. She also boasts a pop-video cameo - playing girlfriend to real-life boyfriend Zayn Malik in "Pillowtalk".

Kendall Jenner rose to fame as part of her famous family's reality show Keeping Up With The Kardashians but has since made a name for herself as a drop-dead gorgeous supermodel. She's grown up on our screens which means we've seen her transform from awkward kid to sophisticated fashion goddess (NOT an exaggeration) before our very eyes.

When you think of the most iconic models of all time, Kate Moss is always one of the first names that springs to mind, right? Since being discovered in the late 80s, she's redefined modelling thanks to her stand-out looks that made her the most sought-after face during Cindy Crawford's heydays. And Moss continues to enjoy a very successful modelling career in her forties, proving age is just a number.

Cara Delevingne may have been born into money but that didn't stop her becoming a star in her own right. While Elle Macpherson may be "The Body", Cara is most definitely "The Eyebrows". Her bushy brows have got us filling in ours to the point of obsession. Having given her brows a break from the fashion spotlight in recent years, she's turned her hand to cracking Hollywood, securing high-profile acting roles in Suicide Squad and Paper Towns. Some girls have it all, eh?

Karlie Kloss was scouted at the tender age of 14 and fast rose above her model rivals due to her fiercely looks and towering frame - she stands at 6 ft 2, with all the poise and grace of a ballerina. Just look how young she looks when she first arrived on the scene in 2009.

Perhaps recently most famous for being married to the late, great David Bowie, Iman was a hugely successful high-fashion model back in the 70s and 80s due to her tall stature, long neck and delicate features. It's kind of hard to understand how Iman is still so youthful at 61 years old - it's hard to believe there's nearly 20 years between these two pictures.

After falling pregnant at 18, Jourdan Dunn has defied the odds to become one of the best-known British models globally. She was discovered in Primark (!?) way back in 2006 and has since been crowned "Model of the Year" at the British Fashion Awards, as well as being Harper's Bazaar's Model of the Year in 2013, all by the age of 26 and while juggling single motherhood with her increasingly demanding career.

Let's face it: Elle Macpherson is a pro. They don't call her "The Body" for nothin'. And not only that, she's also got "The Brains" to go with The Body: Elle is a business woman, a lingerie designer as well as executive producer of Britain and Ireland's Next Top Model and a keen philanthropist. If that wasn't enough, she's also fluent in French and speaks Italian and Spanish. Woah.

All bow down to queen Bündchen! Supermodel Gisele is the number one highest-earning model in the world and has been one of the highest-paid models since 2004. That's 12 years. But let's be honest, it's not hard to see why: her natural beauty and pioneering "horse walk" have served her well.

Many might remember Kate from the 2014 film The Other Woman but she's been making waves in the modelling world much longer than that. Kate rose to prominence because of her curvy figure which set her apart from the stick-thin standard. She also featured in a Carl's Jr burger commercial, making ground meat in a bun look sexy as hell. We will happily eat burgers all day, every day if it means we can look like that. Here's hoping.

One of the original supermodels, Claudia Schiffer became a household name in the 90s and holds the record for the most magazine front covers as a model, getting her name in the Guinness Book of Records which, let's face it, is what we're all aiming for in this life. Claudia still works as a model for luxury fashion and fragrance brands, meaning her career has spanned an impressive 30 years, that's three whole decades.

Say what you want about Naomi Campbell but there's one thing you can't deny: she was and always will be one of the world's most pioneering pin-ups. For example: she was the first black model to grace the cover of Time magazine in 1991. Although she has a reputation for being abusive, the bad press hasn't had too much of a negative impact on her career, even after she was fired from her management company in 1993 for her such behaviour. At the age of 46, Naomi continues to model and isn't short of offers of work - she appeared on the cover of Vogue Australia in 2014.

Many will remember Tyra Banks fondly from her stint as the presenter for America's Next Top Model, making the show that bit more entertaining thanks to her quirky personality and that infamous outburst. But Tyra's modelling career began at the tender age of 15. She became the first African-American woman on the cover of Sports Illustrated and she was one of the highest-earning models in the industry but the early 2000s.

Baby-faced Miranda Kerr was first discovered as a teenager she won Dolly Magazine's model search competition. And it seems they picked wisely as Miranda is now among one of the highest-earning models around, not to mention one of the happiest - the Aussie has just got engaged to Snapchat co-founder Evan Spiegal.

Many of us know Janice Dickinson as the slightly mad, ever so opinionated former model and judge of ANTM. But in the 80s, Janice was the supermodel of the moment - as she says, making a change from the blue-eyed and blonde-haired girls of the time. Although she may be 61, she's aged gracefully and boasts beautiful good looks to this day.

We came for her relationship with John Legend, we stayed for her hilarious Snapchat stories. Yes, when Chrissy Teigen's not busy making us jealous of her and John's #relationshipgoals or cracking us up on social media, she can be found gracing the cover of Sports Illustrated and Vogue. Just what we love - beauty and brains.

Besides being an accomplished horse rider, Edie Campbell is also a highly-established model, appearing on the cover of Vogue in 2016 for the second time. She has also won the coveted "Model of the Year" award at the British Fashion Awards. All of this in a few years? She's one to watch.

The queen of Halloween costumes was discovered after she won a national modelling contest in 1992. Out of 25,000 contestants, Heidi Klum was offered a modelling contract by the CEO of Metropolitan Models New York which opened the door to her 13-year Victoria's Secret Angel career.

OK we'll admit it: we're totally jealous of how well Cindy Crawford has aged. If we had one wish in this world, it's that to have her flawless skin and insanely fit figure by the time we're 50. Cindy has done runway shows for every designer imaginable - seriously, you name it, she's walked it: Chanel, Versace, Dior, DKNY and Valentino, to name just a few. These days Ms Crawford can be seen sitting pretty on the FROW at fashion week with her lookalike daughter Kaia who landed her first Vogue cover aged only 14.

Some might remember Ms Shields as Joey's stalker in the Friends episode The One After The Superbowl but she began life as a child model. Shields was actually the youngest model ever to appear on the cover of Vogue at just 14 years old in 1980 - the same year she appeared in a pretty controversial Calvin Klein ad which included the now-infamous line, "You want to know what comes between me and my Calvins? Nothing". These days you're most likely to see Brooke looking gorge as an occasional guest-host on NBC's Today show.

Who's your favourite supermodel of all time? Let us know @soFeminineUK