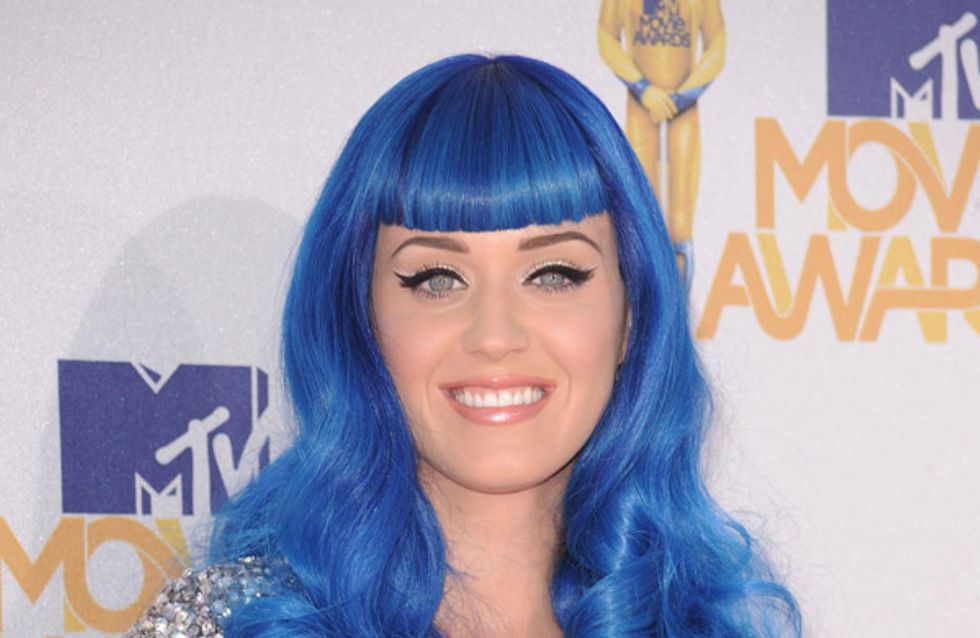 Of all her colourful hairstyles, Katy Perry's smurfette blue wig had to be one of her best. The statement high-shine toupée was certainly a modern take on the blue rinse and she knew how to rock it from all angles. But now, in a cryptic teaser clip for her new single Roar, Katy burns her animated barnet. Could this be the end of the kooky K-Pez and her daring 'dos?

Katy Perry isn't usually one to get hot and flustered about dying her tresses - after all she's been candy pink, smurfette blue and varying shades of raven black ever since she burst onto the music scene.

The infamous blue wig was one of her bravest moves, with a glossy glamour-puss finish and in-your-face fringe.

Despite embracing her kooky colourful hair, Katy's teaser clip for her new single Roar seems to suggest a change is coming. Will she make like Jessie J with a barely-there buzz cut?

In the cryptic 30-second clip, entitled 'Burning Baby Blue', the Wide Awake singer takes to torching her blue wig - and she doesn't look too happy about it.

Set in total darkness with nothing but a flame in view, Katy appears with her poker straight raven locks and a vampy cherry-coloured pout before freezing her pensive gaze at the camera and setting her famous wig on fire.

It seems she's taking her Firework lyrics a little too literally by letting her colours burn!

Clearly Katy, 28, is marking the end of an era - no one burns an iconic wig for nothing - but we're still rubbing our heads on this one.

Could it mark the end of her animated kooky ways? Maybe she's ready to shed her smurfette skin in favour of a grown-up girl image? Whatever the method behind her madness, there's definitely a double meaning to be uncovered here.

We guess only time will tell, but in the meantime we're loving Katy's back to basics look with her natural dark hair and starry-eyed peepers.

Get a first look at the teaser clip here:

What do you think of Katy's barnet burning antics? Cryptic or ridic? Tweet us @sofeminineuk