The Best Red Carpet Beauty Looks From The Emmy Awards 2016

Last night saw the biggest TV glamazons step out for the 68th Primetime Emmy Awards in Los Angeles. Everyone from Emilia Clarke to Michelle Dockery and Emily Ratajkowski put on their Sunday best for the occasion - which of course in Hollywood speak means chain mail dresses, frills and jewel encrusted Prada gowns, obviously. Here's a look at the award winning beauty looks from one of the most glamorous nights in the TV calendar.

While most of us were slipping into our pjs, reaching for that extra Hobnob that we definitely didn't need and avoiding the shower (because that means the weekend really is over), Sunday looked a little different over in Hollywood last night.

The Emmy Awards 2016 were awash with show stopping outfits and timeless beauty looks that made us all question how much longer we could get away with top knots and smudged mascara. We've been using it for at least the last 6 seasons...

That said, this is 2016 don't you know! And while we may be rounding up the best beauty looks ready for us to try and nab for ourselves, let's not forget there's more to life than haute couture and highlighter eh? After all, this is about recognising kick-ass TV talent and performances that gave us LIFE. Emilia Clarke, we're looking at you. 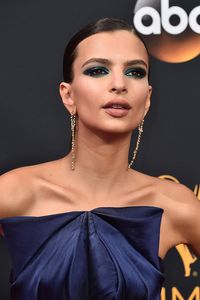