This Girl's Sassy Email About Her Unretouched Graduation Photo Is Hilarious

by Lareese Craig Published on 11 August 2017 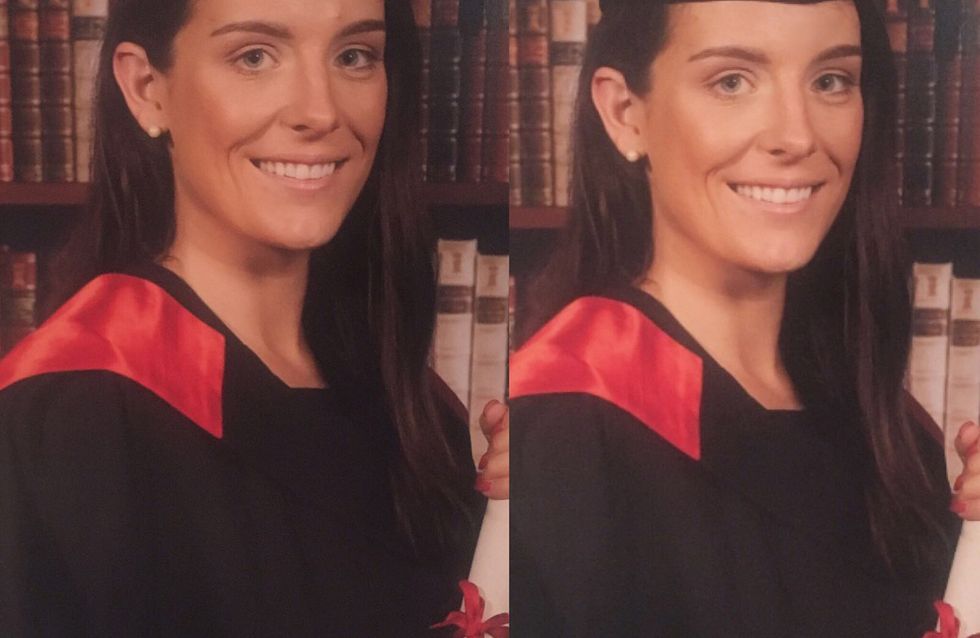 Graduation photos are like running into an ex: you wanna make sure you're looking the t*ts - because let's face it, your parents are going to be polishing that thing up for everyone to coo over for the next 30 years. So, you can understand why this girl got her tassel in a twist when her photos weren't quite as, ahem, spot on as she'd hoped.

We've all had that one hella important event that we just pray - harder than Drake ever prayed in One Dance - won't be tarnished with a breakout. We avoid anything that could stand in the way of us looking fly af: a new skincare product, dairy, sugar, a reckless kid on a swing. We practically swathe ourselves in bubble wrap until the day comes and then in our own good time, like a caterpillar from a cocoon, we emerge.

But being a woman kind of means the chances of a spot stealing your thunder on said important day is, well, pretty much a dead cert. Cheers uterus, you are quite the charmer aren't you?

That's exactly what happened on the day of this girl's graduation. She got a spot. No biggie, right? Everyone gets them, you're still you and you're still beautiful. And anyway, with editing apps these days, one little tap of a button and poof - that pesky white head will be no more, should you not want it there.

Here at Sofeminine, we are all for embracing your body - zits and all - but we're also huge advocates of feeling good about yourself, which is why we're digging her hilarious email response to the company that made her photos.

After previewing her graduation photos on her phone, Bridie Garnham, 25, from West Sussex, was initially happy with the result. Her spot was barely visible, so she felt confident about processing an order.

"I paid £15 extra to upgrade from the standard package, to include three larger photos and four smaller, rather than just one large photo and two little," she said.

"Then when it turned up I was horrified to see the massive spot on my forehead which I didn't initially see. I'm pretty sure it wasn't that horrific or gigantic on the day. I genuinely thought they must have sharpened the photo so the spot as more obvious."

Unhappy with her final images, she then decided to email the company asking if they could retouch the larger images.

The email reads as follows:

"​I have just received my graduation photos, and whilst I am extremely happy with the quality, and receiving them so soon, there is a small minor problem that I am going to complain about (sorry)

"This is going to sound absolutely ridiculous, or hilarious (which ever way you take it...) but......

"On the sample image it was clear that I had a small little spot on my forehead (what a day to have a spot by the way), however when the photo arrived I was quite shocked to see how detailed it was, and how obvious it was in the photo. Initially I bought the sample pack of photos as I was unsure whether I would like the photo, however as the sample didn't look so bad, I upgraded and bought 3 larger photos and 4 smaller ones. Is there no way that the spot could have been photoshopped or smoothed over? Or even so, could you have done something to the image to not make it as obvious? If I had known it would look so awful I wouldn't have upgraded and would have taken the original to a photo shop to ask them to play around with it, instead of buying them directly off you.

"If my face was covered in spots I would completely understand why you wouldn't bother, but because it is just the one I am surprised that nothing has been done with it.

"Is there anything you could do now for the three larger photos? I am not bothered about the four little ones as it is not as clear - however the three larger one will sit on my parents' and grandparents' mantelpiece for the rest of my life and unfortunately I can't appreciate or feel happy with the photo due to the GIGANTIC spot on my forehead.

​"I am happy to attach a photo if you needed, although I am pretty sure when you look at the image it will jump out at you before anything else!!I look forward to your response."

She's our hero tbh. Spot or no spot, we think Bridie looks beautiful either way! And, if it's any consolation, I'm rocking (read: totally not rocking), a very questionable witch-black, uneven lob in my grad photo - think the child catcher from Chitty Chitty Bang Bang. Yeah. There's no amount of editing in the world that could make that look good.

Had a similar experience to Bridie and want us to hear about it? Tweet us @SofeminineUK!

This Victoria's Secret Photoshop Fail Might Be The Worst Yet

#YouLookDisgusting This Vlogger Has A Powerful Message About Beauty Ideals

Looking elegant
by the editorial team

Looking stunning as always
by the editorial team

Looking a little more grown up
by the editorial team