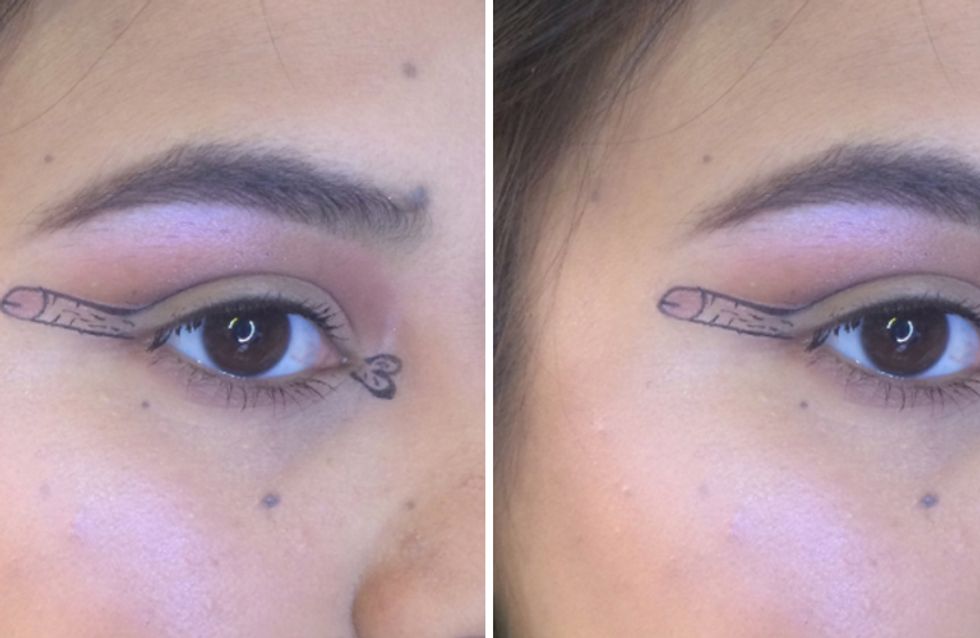 Not a day goes by without X beauty blogger claiming Y is the genius way to improve the appearance of Z facial feature but while we can't deny we've not felt FOMO when reading about such 'on-fleek' fads, this teenager's response to the relentless stream of beauty hacks is just perfect.

First came the vagina-shaped baubles and now we're pumped to bring you news that d*ck liner is the new big thing among Twitter users. The NSFW (or anywhere for that matter) eyeliner art is the genius of 19-year-old Asia Brautigam who's become increasingly frustrated with beauty bloggers obsessively bombarding us with new ways to improve our appearance through the power of makeup.

The Californian teen's original tweet has swelled into a viral sensation pretty much over night. No, your eyes aren't deceiving you, that is a cock and balls in place of standard eyeliner. Sharing her genius idea on Twitter, she wrote: "Wow MUA Twitter has been so creative with their eye looks, thought I’d have my take," and it's not fallen flat.

Asia's inspired a generation with others sharing their own versions of d*ck liner. Feast your eyes on this lot...

@asialbx sooo in LOVE with your look💞😫😫 my new everyday eye makeup pic.twitter.com/bxlP3NEPJC

Will you be trying out Penis Eyeliner? Let us know @soFeminineUK

This Too Faced Setting Spray Promises To Hide Your Hangover