Fun fact: All the people in Karsten Thormaehlen's new photo series 'Ageing Gracefully' are over 100 years old. And if we looked half as happy and gorgeous as these folks when we reach our hundredth year, then we'd be a lucky bunch.

The project is part of a book by the same name which looks at portraits of over 50 centenarians around the world. Thormaehlen travelled from his native Germany to capture the pictures of people aged 100 and over. We're not often used to seeing the older generation depicted in the media in a way that celebrates their long life but if there was ever a stigma surrounding old age, these guys are shattering it one smile at a time.

The overwhelming response from the elderly participants is a sense of pride for living such a long and meaningful life. The New York Post spoke to Marie Runyon, who features in Thormaehlen's book and who is about to celebrate her 102nd birthday, said she was as surprised as anyone to have made it to such an age. "But I was glad, too. I thought, maybe I can do more if I’m 100 years old," she told the publication.

Marie is a lifelong believer in helping the little guy (the picture above is Marie attending a demonstration in 2007) advocating for low-income tenants in Harlem and becoming active in the rent strike that saw her campaign against her and her neighbours' flats being demolished by Columbia University - a victory that ended with the university naming a building after her.

Marie tells the Post the key to living a long and fruitful life is to be passionate, saying: "Go after people who need to be gone after. Don't worry about yelling. I never have, I never will." It might also have something to do with the cheeky gin and tonic she has every night - now that's a bedtime ritual we can get on board with!

Check out some of the 'Ageing Gracefully' series below! 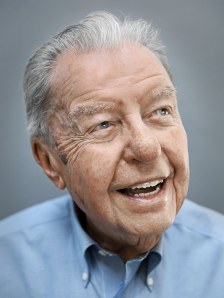 You can look at more of Karsten Thormaehlen's artwork here and you can buy his new book 'Ageing Gracefully' here.

What do you think about 'Ageing Gracefully'? Let us know @sofeminineUK

Baring The Truth: Photographer Shows What Real Boobs Look Like Without Photoshop

Growing Old Gracefully! Our Favourite Supermodels: Then and Now

How And When To Start Your Anti-Ageing Routine