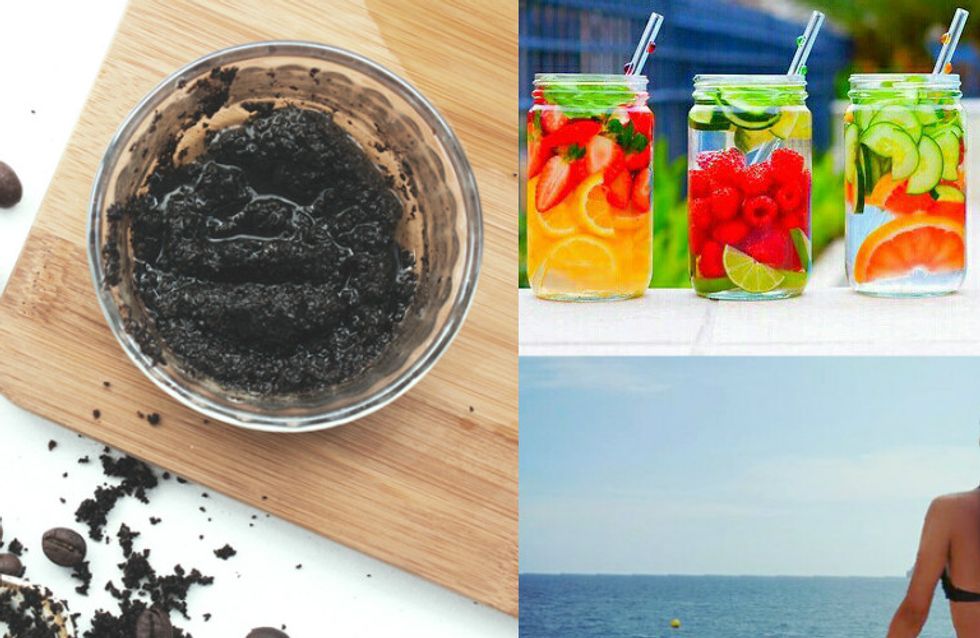 As you look into the mirror you might notice something on the back of your legs that's lumpy and dimpled, almost like the consistency of cottage cheese. To your horror, you realise it's cellulite. Unfortunately almost all women get it, and it's something that, naturally, we all DREAD. Although it's almost impossible to fully get rid of cellulite once you have it, there are various tips and tricks women can follow to prevent or disguise cellulite for good.

Before you try out our cellulite hacks you should probably know exactly what cellulite is. Much to our dismay, women are 80 percent more likely to develop cellulite than men are, according to Jesleen Ahluwalia, M.D., of Spring Street Dermatology.

"Basically, it's fat deposits and also a lot of collagen, so it becomes very difficult to eradicate and get rid of once it's already there," Dr. Ahluwalia said. "Even thin women have cellulite in different areas, typically around the hips, buttock area, and sometimes the lower back. These are the most common places just because of the way the fat is laid in that area anatomically."

Since collagen fibres and fat are already in our bodies, with extra weight gain or hormonal fluctuations (during puberty for instance), that can accumulate, according to Dr. Ahluwalia. Our fat deposits become larger and collagen loss becomes more prominent, which leads to the dimpling and bulky texture women often experience with cellulite. By maintaining a healthy body weight and body mass index (BMI), women can prevent further cellulite on their bodies. However, while weight loss and eating well can help to an extent, it's still a difficult fix.

Although there's no scientific evidence supporting the idea that body brushing or massages can help reduce cellulite forever it's still a temporary solution that many women turn to.

"The active massage — the same thing goes for stretch marks — stimulates collagen remodelling," Dr. Ahluwalia said. "If you’re massaging the area, that helps the body to remodel and restimulate collagen formation and breakdown. So you’re moving things around a little bit. I often tell my patients, especially pregnant women, to massage the buttock area and abdominal area to help prevent stretch marks and cellulite formation during that time frame."

Introduced in the U.S. in the 1990s, Dr. Lionel Bissoon was the first to begin practicing this method. Through mesotherapy, medications are injected into the skin and the fat.

"It's kind of like a needle breakdown like a liposuction technique would be done but you’re not removing the fat," Dr. Ahluwalia said. " You have the cellulite and there’s an attachment, almost like a scar, to the deeper levels of the skin so it kind of breaks that down. Sometimes that can lift up the dimpling effect."

Have you ever felt like you looked thinner thanks to your newly-bronzed skin after a day in the sun? Well as it turns out, tanning can also help lessen the appearance of cellulite as well, making your skin look more toned. While you can do this at home with self-tanner, spending a little money on yourself and getting a spray tan will also help. Cottage cheese thighs, see ya later!

Before you throw out those coffee grounds you used for your morning cup of coffee, trying using them in a wrap to help reduce the appearance of cellulite. Known to be moderately effective for short term reduction, the wrap reportedly tightens the tissue thanks to the caffeine in the coffee. Either scrub the target area with your coffee grounds mixture (coconut oil works a treat) or place the mixture on the area and wrap with plastic wrap for about 15 minutes. Repeat this a few times a week and see the wonderful results!

Having been around for years, many women resort to liposuction to reduce the appearance of cellulite though it's really meant for contouring your body. This surgical procedure removes excess fat deposits and tightens the skin for a slimmer look. However, in order to really target cellulite rather than fat, many doctors recommend Cellulaze, a laser treatment that attacks the cellulite beneath the surface.

"Liposuction can be used to remove the fat but you end up getting more dimpling," Dr. Ahluwalia said. "I tell patients that you may look better in clothes, but if not in clothes it may actually look worse after liposuction."

CoolScupting is a non-surgical treatment that's used by patients who want to reduce fat. The treatment was developed at the Wellman Center for Photomedicine at Massachusetts General Hospital in Boston.

"CoolSculpting is more like a liposuction alternative," Dr. Ahluwalia said. "Basically in certain areas where you have excess fat you could actually cause cooling of the fat, and that causes breakdown of the fat cells and they break down and all dissolve on their own."

While liposuction or CoolSculpting can cost anywhere from £800 for each area, the Fraxel treatment is on the higher end of the spectrum. This laser treatment is done during several different appointments and "treats a fraction of your skin's tissue at a time to give your skin the best results," according to Manhattan Centre for Dermatology.

"Sometimes we do [fractional laser treatments] like Fraxel and that’s really meant to again remodel the collagen," Dr. Ahluwalia said. "You have to do multiple treatments (six to eight) and I usually tell people they'll get about 20 percent improvement. But if you're not maintaining your diet and exercise then that’s also not going be a long lasting treatment option."

Inspirational Tips to Get Your Weight Loss Mission Started:

Why Am I Not Losing Weight? 10 Ways To Make Your Workout Work