by Helen Turnbull Published on 17 August 2017

In today's beauty-gone-mad but super feminist news, I present to you: 3D vagina nail art. No, your eyes aren't deceiving you - women in America really are having life-like, mini versions of female genitals sculpted onto their nail beds at the appropriately-titled Finger Bang salon in Portland, Oregon.

Meet Asa Bree: the self-titled gel nail-art connoisseur and incredibly talented and creative artist. Asa is who we have to thank (or blame, depending on your opinion of this NSFW trend) for the latest in impressive, Instagram nails. She works at the appropriately-titled Finger Bang salon in Portland, Oregon, which is where her 3D vagina nail art was born.

Asa spent two hours crafting mini, life-like (albeit prettier) vulvas onto a client's nail beds and just look how realistic it is. She's prettified the female flower by adding a tiny pearl to mimic the clitoris. Asa shared her finished design on Instagram recently, captioning it with the words, 'pussy power' to make the ultimate feminist statement. For centuries, society has oppressed the female form so isn't it just great we're finally getting revenge?

While we wouldn't recommend rocking up to work sporting this explicit design (or I don't know, your workplace may be super liberal) no one can deny the significance of it.

After a brief scour of #vaginanails on Instagram, we discovered Asa isn't the only nail technician empowering women, one tiny vulva at a time. Check out these other NSFW vagina nails: 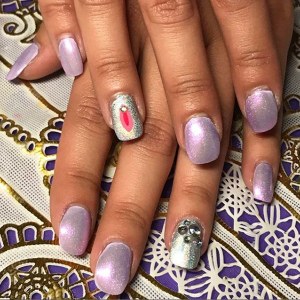 Will you be trying these NSFW nails at home? Let us know @soFeminineUK

Chocolate Nail Art You Can Actually Eat has Already Won 2017

19 Of The Weirdest Nail Art Trends Ever!

Helen Turnbull
…
226 shares
For all the best videos, memes and shareable news!