Kylie Jenner has single-handedly pioneered the rainbow-hair revolution thanks to the endless supply of multi-coloured wigs at her disposable and her unapologetic obsession with filming herself on Snapchat. But of course the Jenners aren't the only ones to dip their locks in coloured waters though, everyone from Rita Ora to Ruby Rose are hitting the bottle, and we're a little obsessed.

Celebrities have the luxury of being able to switch up their hair style and colour more often than us normals change underwear and under the supervision of a highly-skilled colourist. And while we're not reluctant to hit the (wine) bottle on a Saturday night, everyone from Kylie Jenner and Kendall Jenner to Nicole Richie has braved bleaching their precious tresses all manner of bold shades at some point during their time in the spotlight.

Here we take a look back at our favourite celebrity dye-jobs of recent times, dating as far back as Avril Lavigne's pink half-head in 2007, right up until the modern day when candy floss locks appear to be having a moment. 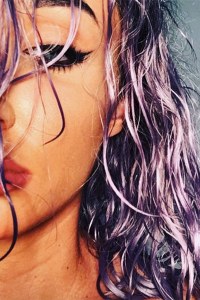 Whose is your favourite? Let us know @soFeminineUK

50 Of The Hottest Celebrity Braided Hairstyles

Helen Turnbull
…
301 shares
For all the best videos, memes and shareable news!