13 Contouring Crazes That Took It Way Too Far

In case you've been asleep for the past few years, contouring is *the* biggest makeup trend of modern times, thanks in part to some apparently famous person named Kim Kardashian and her sister squad. As the #bblogger scene becomes increasingly saturated, makeup artists everywhere are being forced to get creative, calling upon trustee everyday items in their quest to become the latest Insta sensation. Do try these at home, if you dare. 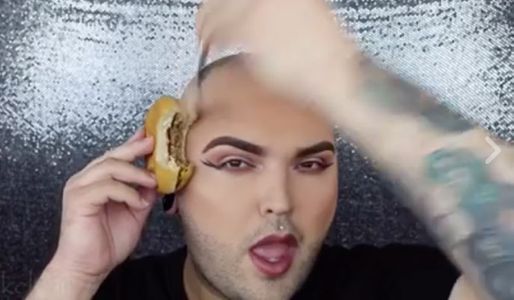 Make Up Artist Skelotim (real name: Tim Owens) went viral for all the right reasons when he mixed make-up with McDonald's in what made for the only spoof tutorial the Internet needed. We think this totally justifies us ordering double portions.

Beauty guru Alle Connell had us hitting the bottle with her booze-fuelled interpretation of the contouring phenomenon. All you need is one bottle of your favourite vino, a large glass and a degree of thirst. Start with the bottle and once you've finished your glass, use that to apply your highlighter. Down for that, tbh.

The humble fork enjoyed five minutes of fame when Instagram stars took to their cutlery drawers in search of the next must-have tool. Unlike the previous two, these make-up addicts were deadly serious. How you can keep a straight face while holding a fork to your nose, we'll never know.

As everyone and their dog joined the contouring club, Allyster LaFleur of LiveGlam.com, upped the stakes by showing how to shadow and highlight your FEET. Surely, all your hard work would rub off as soon as you put shoes on?

In even more unbelievable news, contouring your behind became an actual real-life thing. Not got buns hun? Skip the squats and pass the painting brush instead.

You fake tan the rest of your body (the bits on show) on the reg so why not also paint your face with the stuff too? It's not as if it doesn't smell delicious and never goes wrong. (Said no one ever.) What're you waiting for?

These Christian Louboutins were made for walking and contouring, according to Sadia Slay. It certainly explains the price tag. It's worth noting she also moisturises with a concoction made from banana and honey (!?)

The humble stationary-cupboard staple was put to good use when blogger Huda Kattan proved its uses extend far beyond parcel-packaging. Unsurprisingly, this one didn't stick around for long.

It's pretty self-explanatory but rather than employ two make-up artists, armed with £5000 worth of make-up, for the perfect bikini shots, Chloe Morello had them work their magic to highlight just how out of hand the trend had got. The popular YouTuber hoped to show girls that there's more to 'picture-perfect' social-media snaps than meets the eye.

Want bigger boobs but can't afford a boob job? The key to a bigger bust has been hiding in your make-up bag all this time.

Otherwise known as the contouring OG. Making like you're auditioning for the circus was one of the first cheek-carving techniques to blow up on social media. It requires far too much time and effort for our liking.

'Cos who doesn't need a slimmer neck? *Rolls eyes*

We're hailing Tim Owens (of Skelotim fame) the contouring king for his perfect response to the stupid stiletto tutorial. The full-time MUA and part-time comedian poked fun at the entire blogosphere by suggesting anything with an edge is a contouring tool waiting for its moment. In the video he chisels his cheeks with a garden spade and defines his forehead with a toilet plunge, proving the Internet just needs to stop.

Which is your favourite? Let us know on Twitter @soFeminineUK

This New Orange Makeup Trend Is Coming Up 'Trumps'

40 Of The Cheekiest Bum Tattoos As Inspired By Cheryl Cole