It's been a whole ten years since Kim Kardashian became a household name. Time flies when you're creating an empire, doesn't it? Kim K has gone from standing timidly in the background of Paris Hilton's paparazzi pictures to being the first Instagram we consult when we need fashion or beauty inspo. We take a look back at her evolution from 2007 to 2017 from beauty newbie to fashion aficionado.

A lot can change in a decade. In 2007 low rise jeans were the height of fashion, Miley Cyrus was still Hannah Montana and - let's be honest - we all thought that chunky blonde highlights were hot. I'm willing to bet that almost all of us would cringe hard if we looked back over pictures of ourselves ten years ago. But the good thing about us normals, though, is that if necessary we can easily just burn those pictures of ourselves in blue eyeshadow and cropped leggings in a bonfire. Kim Kardashian, however, cannot.

Although she's had connections to the celeb world since she was young, Kim's first taste of being a celebrity herself began in 2007 after a sex tape of her and then-boyfriend Ray J was leaked. In 2007, there was no Instagram. Halo lighting was not yet in high demand. Highlighter was just a piece of Stabilo stationary. And Kim was just the 26-year-old daughter of a famous lawyer, unexpectedly thrust into the spotlight without a brand image or makeup artist in sight.

Balenciaga. No make up today.

We have to admit, we found it hard to imagine KKW sporting blue eyeshadow and a fresh sweep of baby hair, yet the Getty Images archive provides solid proof that this is not a Kardashian myth. From 2007, Kim's look began evolving slowly and steadily until it hit a catalyst called Kanye West in 2012. As time progressed, the cheeks got more contoured and the eyebrows more well behaved, but her partnership in love, life and fashion with Kanye really set her on the trajectory to become the style and beauty icon that she is today. Can you imagine 2017 Kim Kardashian wearing a chunky waist belt with a buckle as big as the moon? Hell no! Can you imagine 2017 Kim Kardashian wearing a leopard print alice band? Please! Can you even imagine 2017 Kim Kardashian wearing green eyeshadow to go with her green satin dress and topping that look off with a white bolero? Nuh-uh sweetie! Kanye wouldn't allow it. '17 Kim would be sick in her Hermes Birkin at the mere sight of a bolero.

Which is why it's so interesting to see her evolution over the past ten years. She has gone from unsure twentysomething, sheepishly experimenting with fashion and beauty, to a 36-year-old style aficionado who knows her look inside-out and rocks it no matter where she goes. Dressed up or going casual, she always exudes an air of elegance and attitude. And can we just take a moment to appreciate that face? This lady is the queen of contouring, and is able to change her hair from blonde to black, long to short and back again in the blink of an eye. 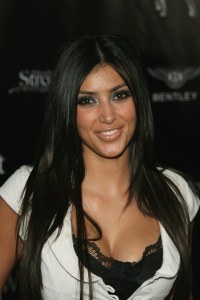 Victoria Beckham's Style Through The Years: Her Wardrobe Evolution

Style File: The Many Looks Of Hailey Baldwin