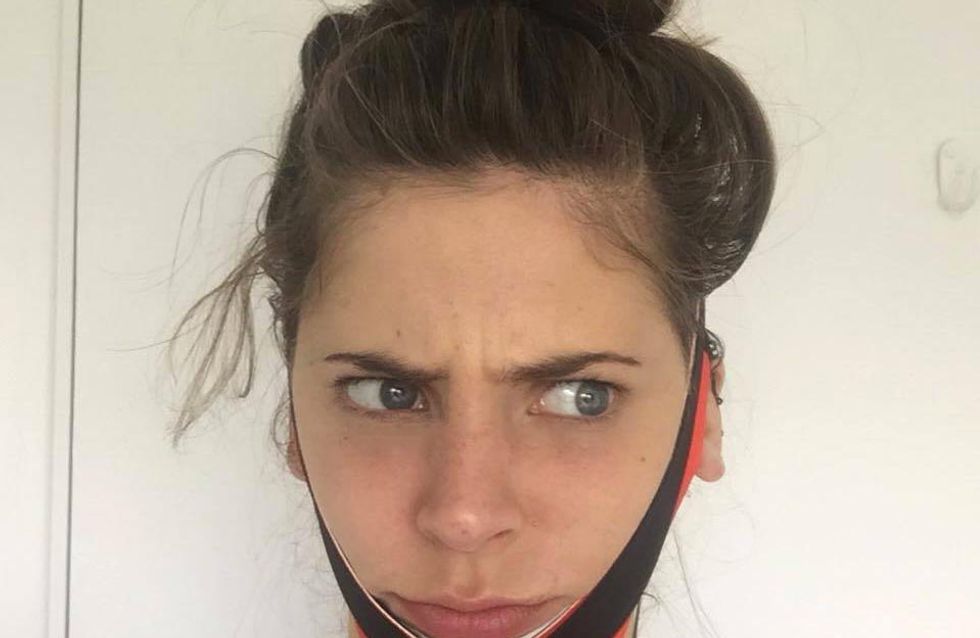 A double chin is something that plagues many of us. It's like you can't eat a cupcake without it going straight to your chin pillow. But what would you say if I told you that there was a way to stop that double trouble in its tracks? Here's what happened when I tried the new ChinUp Mask.

Some of us are lucky enough to have a jawline like fine cut glass; beautiful and defined and angular. A jaw that can be used to open a letter or sculpt blocks of ice into beautiful frozen swan sculptures. These people are lucky people, and I am not one of them.

When you look at a kid stood next to their parents, you can quite often see who inherited what from whom. When I stand next to my 'rents, it is immediately obvious that I get the top half of my head from my mum - mousy brown hair and blue eyes which, I'll admit, I'm rather fond of. But the bottom half of my face is a sloppy mess. My weak jawline is a hand-me-down from my dad who, rather annoyingly, did not bestow unto me his olive skin or thick, dark hair. And he got it from his dad. My grandpa had a regal Churchillian jowliness which has been passed down, albeit somewhat diluted, to my dad and then to me.

As a result my jaw and chin can be... absent, at certain times. When I relax into a sofa, it's like my chin has punched its timesheet and checked out for the day. If I tilt my head too far downwards I get what my boyfriend likes to call "the Earthworm Jim effect," which is to say there is no definition between face and neck. It's all smooth from the nose down, like a thumb in a wig.

But don't cry for me, world - I am secure enough in myself to delight in making fun of my weak structure, so sleep easy tonight. But that didn't stop me wanting to try out ChinUp's new chin mask because let's not beat around the bush: if it's between having a Johnny Bravo chin or a Bob Beltcher one, we're all going to pick the Bravo.

Now, you may be thinking that I have overzealous expectations riding on this tiny wet wipe. Is it going to solve all my problems? Hell no! That's what wine is for. But will it help to add a little definition to my chin? Actually, yes.

First, I measured my jaw using a tape measure held from ear to ear via my chin. 23cm.

The official schpiel is that the ChinUp Mask (£29.95) is a 30 minute non-surgical facelift that can reduce the appearance of a double chin and create a more defined looking jawline. The process is simple: you take the mask and place it across your chin and up your jawline. There is a bit of confusion as to which way I needed to put the mask onto my face - there's long bits and short bits, and whilst the diagrams were showing the mask going on one way the promotional video showed it going on a different way, but in the end, I thought it probably didn't matter too much - if my cheeks get in on the slimming action, I'm not complaining - and so I went with the diagram.

Next, you put on the slimming band, which makes you look like a right tw*t. But it takes 30 minutes and is so easy to use that you can look like said tw*t from the comfort of your own home. It's super tight but you can see its purpose. If I was to offer any recommendation at this stage, it would be to have a quick drink and a snack prior to using the mask because if you get hungry or thirsty, you're screwed. Your slimming band makes your mouth an impenetrable fortress - nothing is going in or out. If you think you'll be able to push your jaw just wide enough to pop a little sip of tea in there, a cheeky Dorito perhaps - you can't. I tried.

The mask contains Q10, Vitamin E and Corum 9235, which to you or I is just a jumble of letters and numbers, but these are the ingredients that strengthen skin cells, protect against free radicals and promote the loss of all that pesky chin fat. Their own patented formula known as "Skintronics" is what helps to reduce the fat and contour your jawline.

I'll be honest: the mask burned. There is a warning that states you will feel a warming sensation, but it feels a lot more intense than just warmth. It's alarming to start with, especially because no one in the promotional video seems to register the burning - they just sit in the shopping centre looking silly waiting for the transformation. I have rather sensitive skin so it might have been heightened by that, but luckily after about 5 minutes the burning subsided. It still felt more intense than "warming", but it was enough for me to stop worrying.​

One episode of Friends down, and BING! My chin was served. And yeah, I actually did notice a difference. Genuinely. I am the biggest skeptic of all when it comes to stuff like this, but I couldn't deny it. Check it out:

Just a word of warning - if you have your hair tied up, be aware that you will have to do it again once you take the band off - as you can see, your 'do will fall victim to the band.

I was pleased! And keen to take my new chin out on the town. When my boyf got home, I asked if he noticed anything different. He managed to name about 20 other things that he suspected might be different ("have you lost weight?" is the stock answer that he uses in these situations - probably a knee-jerk reaction to the sheer panic guys often feel when subjected to a question loaded with booby traps) ​but when I eventually told him he agreed that yes, my chin did look fahbulous.

A couple of days later, my supermodel chin had vanished. It was like a Cinderella story: my new jawline was my beautiful sparkly chariot, but it wasn't to last; it was soon back to being a squashy old pumpkin. But that's ok - the ChinUp mask isn't made to last. It's like whitening your teeth, it's something you do to get ready before a night out. This, for me, was like that. Something I'd use before going out to make me feel confident.

Sometimes I think when you're bombarded with a load of ingredients you don't know, and don't really understand how any of them work, it's hard to put faith in the final product. But in this case please do, because this is one of those rare occasions where it actually does work. And I would definitely use it again.​

If you're keen to try the ChinUp Mask for yourself, you can buy it here. ​

Have you tried the ChinUp Mask? Let us know how you got on! @sofeminineUK

Glitter Lips And Beyond! The Hottest Emerging Beauty Trends of SS17