by Pascale Day Published on 3 March 2017 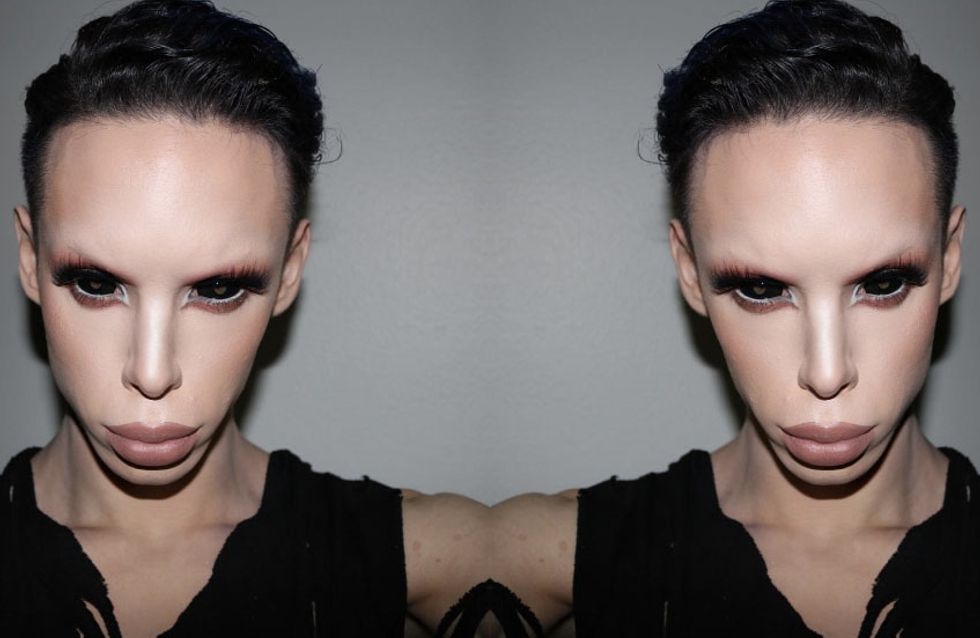 We've seen men become cats and women become human barbies. We've seen Justin Bieber and Kim Kardashian fans splashing the cash to look like their idols. But, you ain't seen nothing like Vinny Ohh before. The 22-year-old make-up artist has a dream like no other, and it involves getting rid of his genitals...

Los Angeles makeup artist Vinny Ohh has a dream, and that dream is to be genderless. Oh, and an alien

The 22 year old started having cosmetic surgery when he was 17 years old. According to the MailOnline, Vinny started with lip fillers, before having two nose jobs and brow and cheek fillers - and he hasn't stopped there. So far he has had: 35 whole body and face laser treatments, 12 cheek fillers, 2 brow fillers, 15 lip fillers, 10 wrinkle fillers, 5 Botox sessions, 5 nose procedures, 1 under-eye Botox, 5 facial peels and 20 cryo facial freezings. Now Mr Ohh is planning on splashing out $160,000 (£130,000) in order to have his genitals, bellybutton and nipples removed. Ouch.

Cuddle season begins! #tb to my shoot with @deadmansjoy13 on the cold dirty ground

He said: "I want to be a sexless alien being. The overall image I want to do is an alien. I want to be a hybrid, not male or female. I've wanted to be sexless and genderless since I was 17. I don't want people to think I'm trying to change into a woman. I could live without sexual organs so why should I have a penis or a vagina."

But whilst he waits to find a doctor who is willing to perform these surgeries - on top of the other 110 procedures he's had in the last 5 years - he uses big black contact lenses and is partial to an interesting dye job. Vinny says his foray into genderless alien territory began with his connection to the fact that he has "a really big head [and] no eyebrows".

I will not die, I will keep quiet, I will hold you high. By @deadmansjoy13 harness @ccreatrix

Vinny is also an LGBTQ activist and feels like his look encourages people not to be labelled: "Over the years, I've realised I'm not gay, bi, trans or any of these things, I just want to be me. I do it to inspire the world in a certain way, I want people to stop labelling others or putting them in boxes."

This likely isn't to be the last time you hear of Vinny, either. He's due to star in The Plastics of Hollywood, a reality TV show about people who are addicted to cosmetic surgery, living in a house and chasing their Hollywood dream.

What do you think about Vinny's surgery dream? Let us know! @sofeminineUK

You Can Now Buy Anti-Wrinkle Tape For Your Neck

With the iconic red lipstick
by the editorial team