From Bob To Braid: The Beauty Of Gigi Hadid's Ever-Changing Hair

by Pascale Day Published on 29 September 2016

Gigi Hadid's hair landed slap-bang on our radar when she turned up to the American Music Awards in 2015 with a sleek bob that mysteriously appeared and disappeared in the space of one night. But truth is, we should have been into her locks for way longer than that, because she has some of the best hair in the biz. Smooth, sleek and always shiny, we're always so damn jealous of Gigi's 'do. Check out her moments below.

Every day's a good hair day when you're Gigi Hadid. She has a style for every occasion, and there's not a single lady on the planet that doesn't want what she's got. Her 'do always changes with her look, so from the parting to the length to the badass Beyonce-esque chunky plait that she was sporting at her Tommy x Gigi meet and greet in early September, she always manages to make long blonde hair look totally different. And the changes in her hue whilst constant are beautifully subtle, meaning she can go from a beachy blonde to a honey bronde - as seen most recently at the Versus show during London Fashion Week - without making it a stark transformation.

So whilst you're looking through these pics we'll just be here trying to figure out how we can get ourselves a super long plait a la Gigi, okay? 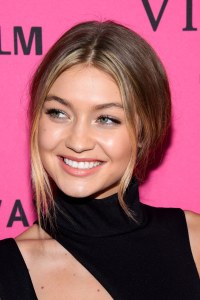 Fringe Hairstyles: The Best Celebrity Bangs Of All The Land